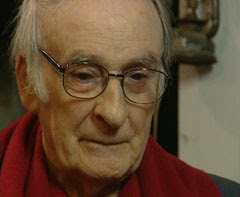 
Born on October 10, 1921 in Pieve di Soligo near Treviso, Andra Zanzotto is one of the most respected contemporary poets in Italy. His father, Giovanni, received degrees from the École supèrieure de peinture in Brussels and from the Academy of Fine Arts in Bologna. During his early ears the young Andrea lived with his parents near via Sirtori, but in 1922 they moved to the house in the Cal Santa district which is often described by the poet in his works.


In 1939 Zanzotto enrolled in the College of Letters at the University of Padua, working at the magazine Il Bo. He received his degree in Italian literature in 1942, writing on the work of Grazia Deledda.
He was called into military service soon after, but was deferred for asthma and other causes. He refused to respond to volunteer recruitment of the Fascist Party.


A recipient of many awards and a skilled reader of classical as well as contemporary literature, Zanzotto has also published a long series of brilliant essays. Mondadori brought out two volumes: Fantasie di avvicinamento (1991) and Aure e disincanti (1994).