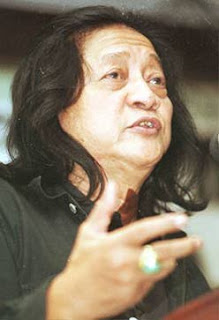 Born into a Roman Catholic family in Solo, West Java, in 1935, Rendra was baptized as Willibrordus Surendra Broto, but changed his name to Wahyu Sulaiman Rendra when he embraced Islam upon his marriage in 1970 to Sitoresmi Prabunigrat, his second wife. Throughout much of his life we he was known simply as Rendra.
He studied English literature and culture at Gajah Mada University in Yogykarta in central Java, but did not graduate, being involved in his first theatrical production for which he was employed. He staged his first important play, Dead Voices, in 1963. Rendra was fascinated by theater since it could embrace both his interest in religious ritual and Western-influenced avant-garde experiments. His sometimes audacious readings and his own poems and the outrageousness of his theater performances brought him wide attention throughout the sixties and into the 1970s. The press gave him the name "Burung Merak," the "Peacock."
Increasingly in the 1970s and 1980s, Rendra moved away from his controversial innovative experiments to an embracement of multi-ethnic cultural expressions throughout Indonesia. In a 1969 drama, he required his actors to give up dialogues, using only their bodies and simple sounds such as "Bib bop," "zzzzz," and "rambate rate rata," performances which journalist poet Goenawan Mohamad described as "mini-word theater."
Among Rendra's 1970s plays were Mastodon, The Condors, The Struggle of the Naga Tribe, and The Regional Secretary, some of which were banned because of their criticism of the second President of Indonesia, Suharto.
He also performed Western theater such as works by Shakespeare, Brecht, and the Greeks. Looking younger than his years, Rendra played Hamlet into his late 60s.
During the Suharto reign, Rendra lived in a poor district of Jakarta, visited by artists from around the world. He was increasingly involved in poetry during this period, using both his performances and readings as a way to gather the masses. In 1979, during a reading at the Ismail Marzuki art center in Jakarta, agents of Suharto threw ammonia bombs onto the stage and arrested the poet. He was imprisoned in the Guntur military prison for none months, kept in solitary confinement.
After his release from prison, Rendra continued performing and reading, starring in his own eight-hour long play, Panembaha Reso, a work centered on the succession of power in Indonesia. In his later years, Rendra received numerous literary awards, including the Art of the Indonesia Government award in 1970, the Prize of the Academy Jakarta, and the Main Book Prize of the Ministry of Education and Culture in 1976. He was often mentioned as a possible choice of the Nobel Prize for Literature.
Rendra's poetry is narrative and colloquial, sometimes employing sounds and rhythms such as those he used in his theatrical productions.
Rendra died of coronary heart disease in 2009.
BOOKS OF POETRY

Fantastic
One hot Sunday
in a church full of people
a young priest stood at the pulpit.
His face was beautiful and holy
his eyes sweet like a rabbit's
and he lifted up both his hands
which were lovely like a lily
and said:
"Now let us disperse.
There is no sermon today."

No one budged.
They sat tight in their rows.
There were many standing.
They were stiff. Refused to move.
Their eyes stared.
Their mouths hung open
they stopped praying
but they all wanted to hear.
Then all at once they complained
and together with the strange voice from their mouths
which had to be quickly stifled.

"You can see I am still young.
Allow me to care for my own soul.
Please go away.
Allow me to praise holiness
I want to go back to the monastery
to meditate on the glory of God."

Again they complained.
No one moved.
Their faces looked sad.
Their eyes questioned.
Their mouths gaped
wanting very much to hear.

"This people ask for guidance, Lord
God, why have you left me at this moment?
Like a flock of hungry lazy jackals
they hang their mouths.
It is hot. I piss in my pants.
Father. Father. Why hast Thou forsaken me?"

Still no one moved.
Their faces were wet.
Their hair was wet.
Their whole bodies were wet.
Sweat poured onto the floor
because it was so hot
and of the misery they bore.
The stench was extraordinarily foul
And their questions took stank foully.

"My brothers, children of the heavenly father.
This is my sermon.
My very first sermon.
Life is very difficult
Dark and difficult
There are many torments.
So in this regard
the wise way to live is ra-ra-ra
Ra-ra-ra, hump-pa-pa, ra-ra-ra.
Look at the wisdom of the lizard
the created God loves most
Go close to the ground
For:
Your souls are squeezed between rocks
Green
Mossy
Like a lizard ra-ra-ra
like a centipede hum-pa-pa."

"To the men who like guns
who fix the flags of truth to their bayonet-points
I want you to listen carefully
to lu-lu-lu, la-li-lo-lu.
Lift your noses high
so you don't see those you walk on.
For in this way li-li-li, la-li-lo-lu.
Cleanse the blood from your hands
so as not to frighten me
then we can sit and drink tea
and talk of the sufferings of society
and the nature of love and death.
Life is full of misery and sin.
Life is a big cheat.
La-la-la, li-li-li, la-li-lo-lu.

The people exploded with the passion of the lives.
They stood on the pews.
Banged with their feet.
Bells, gongs, door-pailings, window panes
If it made a noise they pounded on it.
With the one rhythm
In accompaniment to their joyous shouts of:
Bong-bong-bong. Bang-bing-bong.

"Because we are hungry
let us disperse.
Go home. Everyone stop."

Cha-cha-cha, they said
and their eyes burned.

"Go home.
The mass and the sermon are over."

Cha-cha-cha, they said.
They didn't stop.
They pressed forward.
The church was smashed. And their eyes flashed.

"Lord, Remember the sufferings of Christ.
We are all his honored sons.
Hunger must be overcome by wisdom."

Cha-cha-cha.
Then they chopped his body to bits.
Everyone at his flesh. Cha-cha-cha.
They feasted in the strength of their unity.
They drank his blood.
They sucked the marrow from his bones.
Until they had eaten everything
and there was nothing left.
Fantastic.

—Translated from the Bahasa Indonesia by Harry Aveling