Antonius Otto Hermannus, writing under the name of Toon Tellegen was born in Den Briel, Netherlands in 1941. He is considered one of Holland’s finest poets, and his work has received numerous literary awards, including the Zilveren Giffel in 1990, 1997, and 1999, the Jan Campertprijs in 1993, and the Constantijn Huygenprijs in 2007 for his complete works. 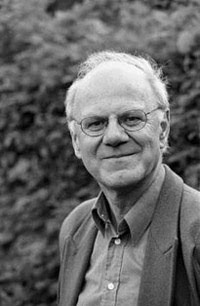 Although Tellegen defines himself as a poet, he is also a noted novelist and children’s book writer, noted particularly for his animal stories, and he also has written several plays. He works as a General Practitioner of health in Amsterdam. He has also written several works of drama.

His first book of poetry, De zin van een liguster, was published in 1980, and he has gone on to write some 26 books since, most of them published by the noted Amsterdam publisher, Querido.

The poetry has been published extensively abroad, including in the Czech Republic, Finland, Germany, Ireland, Portugal, and Russia. Two of his books have been published in the US.

His English translator, British poet Judith Wilkinson has written of his poetry:

[Tellegen’s] poetry, with its absurd humor coupled with an unexpected urgency, occupies a unique place in Dutch literature. Indeed his work defies comparison with that of any other Dutch poet and might better be seen in a larger European context. Tellegen has been compared, for instance, with Russian absurd writers like Danill Kharms, though he does not quite share the Russian feeling for the macabre. One of his earliest influences was perhaps his grandfather, a Dutchman who was himself an unpublished but highly imaginative writer, and who had lived in Russia until 1918. Tellegen recently published his memoirs of this grandfather, who shared with the young Tellegen his extraordinary stories of Russia, mixing fact and folktale, full of frantastical metamorphoses and utterly unpredictable twists of events.

In N. (New York: Cross-Cultural /Communications, 1993); About Love and Nothing Else (Orinda, California: Shoestring Press, 2008)

Everyone thinks everyone else is alone.

Everyone knows this for certain and sets off on a journey.

the roads are impassable.

But no one is alone.

No one struggles against the storm,

no one falls and can’t go on.

and no one is found, on a November morning,

when the crows are cawing

and the sun is pale and servile.

I came to a door and read:

Thinking About Death is Forbidden.

I cast down my eyes

And stopped thinking about death.

I went inside and someone cried:

“What are you thinking about now?”

I walked through gardens, climbed mountains,

waded through rivers, got lost in swamps and deserts

and only just managed to find the way back.

I came to the same door and read:

Think Only About Death.

“Are you thinking about it?” I heard someone call.

The scent of honeysuckle, the sun setting.

It was summer, freedom reigned

Posted by Douglas Messerli at 2:16 AM