Stephen Ratcliffe was born in Boston on July 7, 1948, and has lived in the San Francisco Bay Area since the age of four. He went to Reed College for three semesters, then transferred to the University of California Berkeley where he received a B.A. in 1970 and a PhD in 1978. 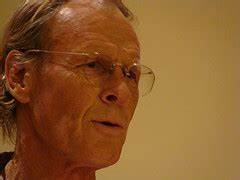 He followed these publications by three 1,000-page books, each written in 1,000 consecutive days: HUMAN / NATURE (2007), Remarks on Color / Sound, and Temporality (both still unpublished). His 14-hour reading of HUMAN / NATURE at the University of California-Davis on June 8-9, 2008 and another 14-hour reading of Remarks on Color / Sound on May 16, 2010 at Marin Headlands Center for the Arts can both be found at PennSound:

He is also the author of three books of criticism: Campion: On Song (Routledge & Kegan Paul, 1981), a "close reading" of one twenty-four line song by the English Renaissance poet/composer Thomas Campion; Listening to Reading (SUNY Press, 2000), a book of essays on contemporary ‘experimental’ poetry and poetics; and Reading the Unseen: (Offstage) Hamlet (Counterpath, 2010), a book about action that doesn’t happen in Hamlet except in words, the Ghost’s speech about his murder in the orchard, Ophelia’s speech about Hamlet’s visit to her “closet,” Hamlet’s speech about his voyage to England, Gertrude’s speech about Ophelia’s death in the stream, etc.

He lives in Bolinas, a small town on the coast north of San Francisco, is the publisher of Avenue B books, and taught at Mills College in Oakland.

Mica, asleep in this thought of a bed in the next room

of people you drove beside as if it were a freeway, planned

first the foot in its still carefully broken light, the house a shadow thins

as talking surrounds the car, a look that is

the "circumstance" of something in writing about the garden

in its present position, the letter too loud untitled

thinking for example that by its presence in the world music

has to do with evening distances, how everything dissolves almost

hanging in a screen, believing that nothing but space and light

between wind on the street and the way you see it

in a prism opened by a knife, abstract

on the edge of inflection

you walk in a circle down the block, something

by design in a place wavelengths hide under the music

memory of the form the face lost, most thin.

Posted by Douglas Messerli at 1:18 AM