Paul Braffort was born December 5, 1923 in Paris. His parents both worked for Western Union, and when he was a child his father became a canvasser for the Great Northern Telegraph Company of Denmark, traveling around France to solicit new business. Braffort was a bright child, and thanks to a precocious performance on his entrance exam and interview, was able to secure a scholarship to the Lycée Buffon, where he laid the groundwork for his interest in mathematics. His upbringing instilled a strong leftist political streak in him as well as a love of music and film. He learned to play the piano as a child, and developed an interest in jazz during his teens.

In 1939, the family moved to Normandy for fear Paris might be bombed during the mounting hostilities of the Second World War. While there, he enrolled in Philosophy with the intention of one day teaching Natural History. When he accidentally turned up in the mathematics classroom on his first day at the Lycée d'Alençon, he decided to stay. During that year, he explored the work of Poincaré, Bergson, and Einstein, expanding his understanding of physics and math. 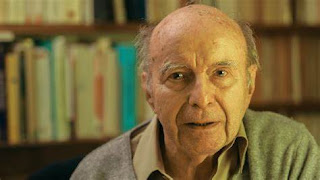 In 1940, the Braffort family returned to Paris. That November, Braffort participated in the first anti-Nazi protest in occupied Europe together with other students from the Lycée Buffon. He continued to take part in resistance activities throughout the war as part of a group of students led by Jacques Baudry who disseminated leaflets and staged protests. Baudry and four other members of the group were arrested and shot by the Germans for their rebellion in 1943. These students are memorialized by a plaque at the school, and the “Place des cinq martyrs du Lycée Buffon” near Montparnasse station. When he learned of their deaths at the Liberation, Braffort confirmed his dedication to political activism by joining the Communist Youth movement and its subsequent incarnation, The Union of Republican Youth in France (UJRF, l’Union de la jeunesse républicaine de France).

Braffort eventually took degrees in mathematics and philosophy at the Sorbonne, and, while he intended to complete a thesis on the foundation of mathematics under the direction of Gaston Bachelard, was unable to do so for lack of a scholarship from the National Center for Scientific Research (CNRS, Centre national de la recherche scientifique).

In 1949, Braffort joined the Atomic Energy Commission of France as a librarian tasked with creating a new classification system for the commission. In 1954, he was asked to create and direct the Laboratory for Analogue Computation, and was thus at the forefront of computer research in France. In 1959 he was transferred to Euratom (CEEA, Communauté européenne de l'énergie atomique), where he continued work on computing and formed the CETIS research group (Centre Européen de Traitement de l'Information Scientifique).

On March 13, 1961, Braffort was inducted into the OuLiPo as a founding member by Raymond Queneau and François Le Lionnais, his friends and fellow mathematicians. His early contributions to the workshop for potential literature concerned the use of computers. He published his first book of poems, My Hypertropes: Twenty-One Minus One Programmed Poems, as the ninth installment of the Bibliothéque Oulipienne in 1979. Each poem in the series of twenty is dedicated to another writer who was a member of the OuLiPo at the time and makes references to constraints and publications by those writers. The principle of the work is based on Zeckendorf’s theorem that any number can be expressed as the sum of two or more Fibonacci numbers. Those Hypertropes that correspond with the Fibonacci series (in which each number is the sum of the two preceding: 1, 1, 2, 3, 5, 8, 13...etc.) contribute key words and phrases to the other poems. In short, each poem is “programmed” by the poems containing those numbers that can be added to make it; for example, the 12th poem contains words and references extracted from Hypertropes 8, 3, and 1.

Between 1964 and 1971 Braffort was part of the European Space Technology Center, where he worked in the emerging field of artificial intelligence, a subject on which he would later publish numerous essays and textbooks. After an appointment as a professor of computer science at the University of Paris XI at Orsay, he ran a data-processing company for several years and then was appointed a visiting scholar of “computational linguistics” the University of Chicago from 1988 to 1991.

His early interest in computer-assisted writing led him to co-found ALAMO [http://alamo.mshparisnord.org/] (Atelier de Littérature Assistée par la Mathématique et les Ordinateurs, or Workshop for Literature Assisted by Mathematics and Computers) together with Jacques Roubaud in 1981. Marcel Bénabou, Paul Fournel, and Italo Calvino were early members. The group created computer programs for writing poems in various forms and continues to explore the possibilities of combinatoric poetry.

Not only was Braffort a mathematician, scientist, engineer, and poet, he was an accomplished songwriter. In 1958, he released an album, "Des atomes et des hommes," which ties together his interest in atomic energy, mathematics, eros, and wordplay. He continues to write music, and recently released a triple album that includes settings of poems by Raymond Queneau and a host of Oulipo writers (including Bénabou, Calvino, Duchamp, Jacques Bens and Jean Queval). He maintained a website with an extensive archive of his writings and compositions, which can be found at http://www.paulbraffort.net/.

BOOKS OF POETRY and OTHER WORKS 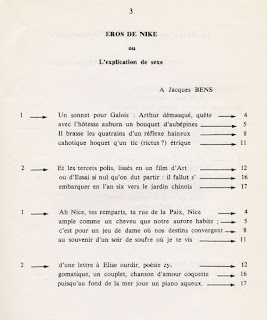 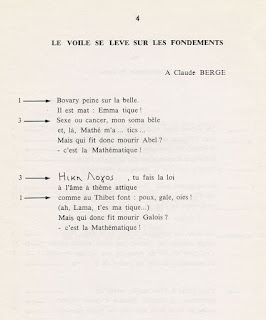 Posted by Douglas Messerli at 2:14 AM