Frigyes Karinthy was a prolific writers of short stories, poetry, plays, and essays. But he is best known as a humorist and satirist, the author of sequels to Swift's Gulliver's Travels — Utazás Feremidóba (1916, Journey to Faremído) and Capillaria (1921) — and the autobiographical Utazás a koponyám Körül (1937, Journey Around my Skull). His poetry — often a blend of Biblical-like diction and colloquial language or, as one critic has described it, "a mixture of carefully polished...classical language and broadly-rolling, Whitmanesque verse" — was collected in Nam mondhatom al senkinek (1930, I cannot tell it to anyone) and Üzenet a palaaaackban (1938, Message in a Bottle). 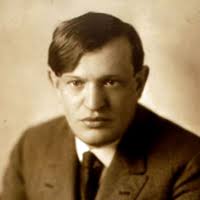 In Hungary he is also beloved as the author of a book of parodies, Így írtok to (This Is How YOU Write), many of whose lines have become proverbial. Like many of the New York Algonquin writers in the United States, Karinthy became known as a wit of almost legendary repute. With writer Dezsű Kosztolányi, he held literary court at the famed Budapest New York Café, as he and Kosztolányi played sophisticated verbal games and satirized the leading Hungarian poets such as Endre Ady, Mihály Babits, Gyula Illyés, Attila József and Lōrinc Szabó.

Karinthy's son, the noted novelist Ferenc Karinthy, contributed to the anecdotes of his father. His other son, Gabor, is a poet.

Karinthy is also described as the creator of “six degrees of separation” concept, that we are all connected to one another through a series of six individuals in our lives.

Grave and Gay (selections from his work), trans. István Kerékgyártó (1973); selections in In Quest of the Miracle Stag: The Poetry of Hungary, edited by Adam Makkai (Chicago: Atlantis Centaur/Budapest: Corvina, 1996).

The Message in the Bottle

(The Poet Is Asked Why He No Longer Writes Poems)

(a few illegible lines, then:)

are frozen. This bottle's in my left hand. The right

holds the joystick. It has grown very stiff.

There's thick ice on the wings. I don't

know whether the engine can take it. It makes Queer

I don't know how high up I am

Nearness and distance — all empty. And all

my instruments are frozen: the scales

of Lessing and the compressometer of the Academy;

the Martinetti altimeter, too. I think

I must be high enough because the penguins

no longer lift their heads as my propeller

drones above them, cutting across

the Northern Lights. They no longer hear me. Here are

no signs to see. Down there's some rocky land. New land?

Unknown? Ever explored before? By whom? Perhaps

I don't know. And I confess

of this thin air is biter, horribly bitter...

It could be that my nose has started to bleed.

at the point I gaze at. The pemmican

has gone maggoty... What star can that be?

Perhaps already... from the beyond...? And what's the date?

Wednesday? Thursday? Or New Year's Eve? Who could be

beside the anxiously guarded hearth

of petty feelings; bird brothers in the depths

Is there no one to hear this exiled fellow-crow, myself?

A little while ago

something crackled through the rusty antenna of my radio...

I hear that Mr. D. has found a fine adjective

while C. has discovered a new metaphor

between two rhymes in Love Canal.

The society's reporting it. Congratulations!

But how does he every escape to return?

into the empty wine bottle

and drop it through the hatch. Like rolling dice!

If an uncouth pearl-diver should find it, let him

throw it away, a broken oyster,

bt should a literate sailor find it,

I send this message through him:

"Here I am, at the Thirteenth Latitude of Desolation,

the Hundredth Longitude of Shame,

the utmost Altitude of teeth-gnashing Defiance,

somewhere far out, at the point of the Ultimate,

and still I wonder whether it is possible

to go any farther...

—Translated from the Hungarian by Paul Tabori

Towards your hand, your hair

Towards your hand, your hair, your eyes

Towards your hand, your hair, your eyes, your skirt

Why this snatching? — You ask me always,

Annoyed and loudly, or shaking your head in silence —

Why not soft and gentle caresses,

Why this snatching, and in my eyes a twinkle

And worse still, I am laughing — impudently!

It is so strident, rude and ear-splitting!

You'll leave me here at once, or smack my hand!

Flower, don't leave me, I rather tell you

I tell you — I breathe in your ear, wait,

Just smooth this curl away now.

Towards your hand, your hair

Towards your hand, your hair, your eyes

Towards your hand, your hair, your eyes, your skirt

What keeps snatching — you still can't think of it? —

though you've this same expression

Always when, annoyed, you try to find it off

Holding your hair, your eyes, your skirt against it.

Towards your stem stamen

Towards your stem stamen pistil

Towards your stem stamen pistil petals

What keeps snatching, flower? — The wind!

This was just a light breeze

This can only snatch and chirp away,

But now I have to speak to you about my family,

Proud, Trumpeting Tempest was my father —

The famous Typhoon of Arkansas my mother,

A whirling tornado married my sister —

Fair flowerfluff, have you ever wallowed exalted — exhausted

Hoisted on a heaven-piercing hurricane?

So don't smack me now on the hand, dear.

Brother, it seems, you have been beaten.

As Law decrees and Precept goes —

Your corpse is sniffed round by hyenas

And circled by the hungry crows.

It's not the pack who were the stronger,

Smaller beasts beat you to tatters —

And who fights now over your carcass:

Your fist when it was time to use it

Always stopped halfway in the air —

Was it Charity? Weakness? May be.

Or mere disgust, perhaps. So be it.

I prefer that worms should eat me

Rather than I should feed on worms.*

*These two lines have become proverbial in Hungarian.

"The Message in the Bottle," "Dandelion," and "Struggle for Life"

Reprinted from In Quest of the Miracle Stag: The Poetry of Hungary, edited by Adam Makkai (Chicago: Atlantis Centaur/Budapest: Covina, 1996). Copyright ©1996 by Atlantis-Centaur. Reprinted by permission of Adam Makkai, with thanks to Peter Zollman and Paul Tabori.

Posted by Douglas Messerli at 2:40 AM