Sarah Law was born in Norwich, England, and studied English Literature at Cambridge and London universities, completing a Ph.D. on Modernism, Gender and Mysticism in 1997. She currently lives in Norwich and teaches Creative Writing and Literature at the University of East Anglia. She has an interest in the medieval mystics and has lectured on Julian of Norwich (the first woman to write a book in English) in England and America. She is interested in the links between art, writing and spirituality and her own writing tends towards an innovative exploration of these subjects. She has been published in numerous anthologies (including The Allotment, an anthology of new lyric poetry to be published by Stride in 2006) and magazines, and also regularly reviews contemporary poetry for Stride and Orbis magazines (UK). 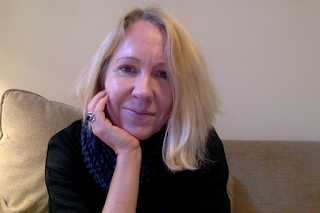 Her first poetry collection, Bliss Tangle, was published by Stride in 1999 with the help of a Ralph Lewis award. The Lady Chapel was published in 2003, also by Stride: “a brilliant book: funny, ecstatic, mystical, playful, sensuous and deliciously intelligent. And behind these qualities there is an intense joy” (George Szirtes). Her third collection, Perihelion was published in 2006 by Shearsman books. Like all Law's books, Perihelion comprises single poems and sequences, including a lyrical response to renaissance art, and a series of meetings with monsters. She is currently working on further sequences, including a sequence of Bach Flower poems. “The accumulation of poetic responses to a set system of symbols is a wonderful way to write: inspiring, guiding, prompting the unconscious mind to forge connections and the conscious mind to play and shape.

“Sarah Law’s work lives between experiment and lyric, the avant-garde and the mainstream, welcoming all with open ears and eyes. Informed by mystery as much as by mastery of form, her work sings in the dark and glows in the silence. She is an astonishing and original voice, whose poetry always entices and delights.” (Rupert Loydell)

“I love to write and fight shy of categorisation: when a poem needs a formal anchoring I will be a formalist; but I like to inject a playful accent into the most serious of subjects. I aim to keep the human element in my poems, even though there is a greater fluidity in my writing between 'I' and 'you', 'he' and 'she' than we generally like to believe. Sometimes writing poems is like chipping away at granite: steady, heavy work; but at other times it's only by stretching language to its limits that we can let the light through.”

For an interview with Sarah Law, go here:

within the recesses. Dark and astigmatic,

the act of naming shivers a release. In

with the pin-prick of a chance; informal

It is the fuming of a censor swung through

the plunge of agnosticism. Counting the slow

beats of a carpet song. Clinging, my difference

to the black jacket of singular stance, against

all laws of residual shlock (and the hourly glance).

He knows the counterblast of appetite.

with aplomb. Script-lash is more than enough.

I saw it written down. It must be right.

Or was it published by a misinformant,

a dark-horse rider in decisive flight? I ask,

and then I take another look. But then,

this situation is completely different. Not unlike

a love affair. A one off. A refrain. The rules

are dusty. Shouldn't I take off my mask;

and let the fresh breeze pink my empty cheek,

have the sun's rays offer their own answer:

honey for burning. What you want's incensing-

see how my circuits blanche at your audacity.

I need to know the basics of our blend.

Posted by Douglas Messerli at 2:30 AM