Rosmarie Waldrop was born Rosmarie Sebald in Kitzingen am Main, Germany, in 1935. At age 10 she spent half a year acting with a traveling theater, but was happy when schools reopened and she could settle for the quieter pleasure of reading and writing which she has since pursued in and out of universities (Würzburg, Freiburg, Aix-Marseille and Michigan, Ph.D., 1966) in several countries.

At Christmas in 1954, the young Sebald performed in a concert for US soldiers stationed in Kitzingen, after the performance Keith Waldrop, who had been in attendance, inviting members of the orchestra to listen to his records. Upon that occasion he met Rosmarie and became friendly, the two eventually beginning to translate German poetry into English together. 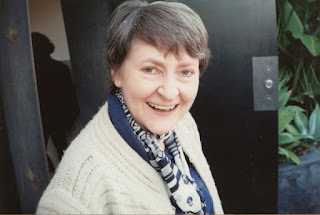 Rosmarie went on to the University of Würzburg, studying literature, art history, and musicology. In 1955 she transferred to the University of Freiburg, discovering the fiction of Robert Musil and participating in a protest against a lecture by philosopher Martin Heidegger because of his wartime association with the Nazis and his anti-Semitic viewpoints.

She next attended the University of Aix-Marseille, where Keith spent the years 1956-57 on his GI Bill.

At the end of 1957, Keith returned to the University of Michigan where he won a Major Hopwood Prize, sending most of the money to Rosmarie in order to pay her passage to the US. The couple were married at Michigan, where she also became a student, receiving her Ph.D. there in 1966.

In 1961 the Waldrops bought a second had printing press and began Burning Deck Press, which when on to become on the most influential publishers of innovative US poetry and works in translation.

Waldrop has also written to important works of fiction, The Hanky of Pippin's Daughter (1986) and A Form/of Taking/It All (1990), as well as books of literary criticism.

In the 1960s Rosmarie also begin writing and publishing her own poetry in English, producing over the years numerous works and further translations, many of which received critical acclaim and brought her several awards including the Chevalier des Arts et des Lettres by the French government and a grant from the Foundation for Contemporary Arts in 2003. She received the PEN Award for Poetry in Translation for her translation of Ulf Stolterfoht’s Lingos I – IX in 2008, and was awarded the America Award for Literature for a lifetime contribution to international writing in 2021.

Waldrop writes of her work: “The linguistic displacement from German to English has not only made me into a translator, but has given me a sense of writing as exploration of what happens between; between words, sentences, people, cultures. In writing, this of course means composition. I am not so much concerned with the ‘right word,’ but how words connect, their affinities, slidings, the gaps between, the shadow zone of silence and margins. As Gertrude Stein knew from the start: “Everything is the same except composition and as the composition is different and always going to be different everything is not the same.”

For an extensive library of audio readings, click here:

For a film of Waldrop with poet Oskar Pastior in Paris, click below

Our Ears Are Now in Excellent Condition

Sound begets sound. A newborn rhythm pitches toward the past, a steady hum shaped like a room. Which, at any instant, you may leave. Our concern is rather with the present. When present, with animal intelligence. You’d rather father forth noise. To flow among the finest, most sensitive, most hair-like vessels. Your other ear can be held against me. The silence tossed does not fall into psychology. On the wet pavement, the drop of a hat, in stitches. Wherever a scar, sounds mushroom. The parts and parcels of the score.

Does his head have a bed in it? How else this ease, this healthy lawlessness, these old sneakers. How to switch on the dark. How to stitch in time. How to empty the mind and tune the membranes. Is John Cage a subject or an idea? Out of step or on track? Does he lean on his elbow? the message is covered with mud at your service. We’re not in the glory of now knowing what we’re doing. Though prolonged falling gathers fatigue, even into winter. After the rain, more rain, I’ve never thought my guts would shake with echoes while I declare my love.

Men are men and moss is moss, but percussion is hitting tin pans, rice bowls, iron pipes. Hitting, rubbing, smashing. And breathes accordingly. Without a bit of confusion, unimpeded, even jazz cannot get hot nor feet off the ground. A sound has no legs to stand on, but timbres fly with the blackbirds, and slavery is abolished. There is no doubt which way is up. The Geneva convention is also abolished. We declare war: sound or silence? By evening, personality is a flimsy thing to build an art on, though it pleases the hepcats. This performance fits long-jointed toes on our thoughts, to wear like a helmet.

Once we’ve learned to listen in ignorance, once the glue is removed, sound comes into its own and penetrates the subtlest tissues. Its essence is to perish, but not, like prose, into comprehension without residue. Suppose the inevitable waves. Why not clear the mind of music before the ratios lap at the labyrinth and the free wheel is drowned. Ignore causalities. Casualties. These sounds do not conceal life’s horror. Took like a duck to second and tritone, the modern intervals. Even more to noise. Blow nose. In time itself, not measure of two or three.

Falls between friends dining together. In the shape of a pear or riding habit. Cuts out having to love our own banalities, or looking for zero in the twelve-tone system. There’s not enough of nothing. Even when we consider hopes in Esperanto. Loudspeakers, multiple, the sounds of knives and forks on tape. Prepare the piano to tack with the where-to no sooner done than forgotten. In Tibet, showing your tongue means welcome, means to show benevolence and purity of words.

While frequencies knit to the inner ear, nobody means to circulate his blood. A density of sound that comes to blows, to terms, to Providence, to nought. The tuning of 12 TV sets, the transparently genetic code, the problems without solution, the threadbare suit. Lectures on nothing and something. While music is contemporary we have no time to separate it from life. this is why there are no masterpieces, which would protect us. The tone clusters where the heart beats. The nerve of microtones sliding across the synapse. Hold watch to mike. This concert is not a compendium.

7. MORE AND MORE WE ARE GETTING NOWHERE

Everywhere, they have been discriminated against. Noises. American, trained to be sentimental, I champion the underdog, coming on loud, banging my fist. Though to write it down is hard. The mind on it takes the ear off it. Think of Morton Feldman. In his music heroic or erotic—an equal, not lesser, flavor? Action within the gamut of love produces sensuous coughing and clicking of tongues. An atmosphere of devotion interrupted by trust in the dollar. Don’t hold your horses. More and more we are getting nowhere, and that is a pleasure.

The necessity to avoid it. Family values require greater earnestness surrounded by mauve bouquets and candelabras in the grand style. What’s not only beautiful but also ugly, not just good, but also evil, not just true, but also an illusion, not just touching nose and ears, but also rubbing eyes? Sounds are shadows, in secure possession of nothing. Straight from the hip, the horse’s instep, immense need. We grow thin inside by exclusion, no matter how huge our terror outside. Of again, of always, of forced marriage, European harmony, owning one’s home. A rhythmic structure of yes to what comes: no other way to the dark night of the soul.

9. ANYTHING MAY HAPPEN AND IT DOES

It is not irritating to be where one is. Only if you’d like to be with competitive remnants or the rapid gallop lurking in the woodwinds. Even if the piano is prepared, don’t fight as the monster shifts shape; the pronoun, reference; the performer, pitch and duration. A technique of imperfection. Listening as ignorance. I’d like a glass of water, here, on tape, unless some other form of tuning. What we need is irresponsibility. If we had to decide which foot to put in we’d never manage. Are you deaf by nature, choice, or desire? As Buckminster Fuller says, movement with the wind in the Orient and movement against the wind in the Occident meet in America, in John Cage, an upward leap into the air, whatever the consequences.

Let’s admit that the lines we draw are not straight. After a life of correctly brushed teeth, we prefer parentheses and italics. Rules of misbehavior. Should it not be Monday? A year from? Inspiration is not a special condition. Ordinary disorder vibrates into surprise. The existence of a sound, for instance, a field phenomenon, not limited to one known point. The smallest common denominator in charge of dynamite. The wall around our ears. The notes soggy with similarities. The view from the balcony repeated by all the windows, which wearies observation.

11. TRANSCRIPTION FOR AN AUDIENCE OF ONE

A throw of dice does not abolish music, but needs skill to become event. A Buddhist and his ears. Though time is up, he still keeps it. With a timbrel. The brain and its dreams, such a fleeting moment in the movement of matter. So like a blind fold. Separation of mind and ear spoils the new sensuality, the tropical fungi. Now what shall we do? November night continues into the movies. Where the horse’s hoof suspended in mid-air comes down. Precise, but not measurable, elastic directions pitch toward change of tempo while the middle holds against expansion. Conclusions can be drawn.

Any technique, to be useful, must fail to control. Of no purpose, of course, of nature. Snore, cough, hiss, slap table, cough, brush hair, laugh, cough, clap, gargle. Music for a room. What cannot be assimilated to the system. Suffice it to spew out the suffix, the prefix, anything fixed. Need I quote Blake? It’s an eight-loud-speaker situation we are in. A hub of transmission. Not an anechoic chamber. This music, which has no stories to tell, is so naked that it will take enormous effort to slip out of its spell.

Posted by Douglas Messerli at 3:07 AM