Born in Harrisonburg, Virginia, Paul Hoover was raised primarily in Danville and North Hampton, Ohio, small farming communities where his father served as Pastor in the Church of the Brethren, a Protestant group similar to the Amish and Mennonites.

He received his B.A. in English from Manchester College in Indiana and his M.A. in English, with an emphasis in creative writing, from University of Illinois Chicago. He taught at Columbia College in Chicago from 1974 until 2003. He was one of the founders of The Poetry Center of Chicago, a major independent reading series, and the well-known literary magazine, New American Writing, which he edits with his wife, Maxine Chernoff. He is also of the editor of Postmodern American Poetry: A Norton Anthology, published in 1994.

Hoover is the author of some ten books of poetry, and has won the Carl Sandburg Award, Chicago’s leading literary prize, for his collection, Idea (1987) and the 1984 General Electric Foundation Award for Younger Writers for poems later published in Nervous Songs (1986). In 1980, he was awarded an NEA Fellowship in poetry. 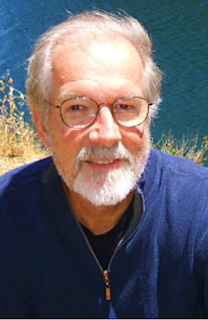 Of his collection Viridian, Mary Jo Bang commented in Boston Review: “Hoover’s concern with language’s representation inadequacy is shared by the L=A=N=G-U=A=G=E poets he’s championed for years in New American Writing and included in Postmodern American Poetry. However, his own poems are more direct, more lyrical, and sometimes seethingly melancholic. Central to all of them (regardless of language’s irrefutable limitations) is his keen intelligence and laconic wit.

Several of collections of poetry have been translated into Spanish.

This is the evening when a bird nests in a hat

left in the street by a flying man, a man of worlds and heat,

of vellum and fog and sculptures that lurk

when we're not looking, this is the evening.

This is the moment when traffic passes as I have taught it to pass,

as I have learned the way, this is the moment.

This is the place where snow was invented.

This is the town it falls on, consisting of three houses

with plastic lights in the doorway, a man who touches his woman

as she likes to be touched--no matter how warm, always snow--

and the hand that turns the world, this is the place.

This is the life that keeps me awake at night,

its distances and skin, and this is time with its foot in a crack,

unable to move yet passing, this is the life.

This is the hour when the crime was committed;

this is the first cause watching. This is the river drowning

and a filthy shadow washing its hands, this is the hour.

who lives by the railroad tracks; this is the train passing.

This is the mill where grain was turned, this is the grain

unfinished, and this is the empty bed of the stream

that used to turn the wheel, this is the mill of absence.

Douglas: Thanks for this beautiful page on PIPS, I'm so happy to see it.