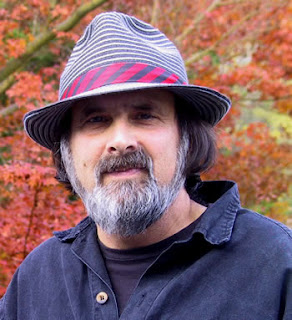 Born in Miami Beach, Florida in 1951, Michael Rothenberg is a poet and songwriter. He received his BA in English at the University of North Carolina-Chapel Hill and his MA in Poetics at New College of California. He has been an active environmentalist in the San Francisco Bay Area for the past 25 years, where he cultivates orchids and bromeliads at his nursery, Shelldance.
His broadside "Elegy for the Dusky Seaside Sparrow" was selected Broadside of the Year by Fine Print Magazine. The broadside of his poem "Angels" was produced in limited edition by Hatch Show Prints as part of The Country Music Foundation's museum resources. His songs have appeared in the films Shadowhunter, Black Day Blue Night, and Outside Ozona. He is also editor and co-founder of Big Bridge Press and Big Bridge, which was an on-line magazine.
His books of poems include Unhurried Vision, Favorite Songs, Nightmare of the Violins, What the Fish Saw, Man/Woman (with Joanne Kyger), The Paris Journals, Grown Up Cuba, and Monk Daddy.
David Meltzer writes, "Unhurried Vision, a year in the life of Michael, is really a deeply loving celebration & farewell to mentor Philip Whalen, a poet, roshi, & all around confounder of boundaries. A day-book; a non-epic odyssey through routes & roots of living & dying; a gastronome's pleasure dome, but above all a deeply stirred & stirring affirmation of poetry's centrality in realizing mundane & profound instances in the everyday extraordinary. Rothenberg's raw footage is disarming; sly, self-effacing, proclaiming, doubting, affirming."
Rothenberg is also author of the novel Punk Rockwell (Tropical Press). Other editorial projects include Overtime: Selected Poems by Philip Whalen (Penguin Putnam, Inc., 2002), As Ever: Selected Poems by Joanne Kyger (Penguin Books, 2002), David's Copy: Selected Poems of David Meltzer (Penguin, 2004), Way More West: Selected Poems of Ed Dorn (Penguin, 2007). He recently completed the Collected Poems of Philip Whalen for Wesleyan University Press (2007).

“I am a Tralfamadorian, seeing all time as you might see a stretch of the Rocky Mountains. All time is all time. It does not change. It does not lend itself to warnings or explanations. It simply is. Take it moment by moment, and you will find that we are all, as I’ve said before, bugs in amber.”

Kurt Vonnegut, Slaughter-House Five; or, The Children’s Crusade, a duty dance with death

Forgiving fate, unfolding, luscious ripe and lotus great, iris true
Heart, where’ve you been, your swells of daylight ease through freeze of my cold life?

So different from caged bird, me, winged dream, beyond
Come tell me how we’ll go on, you want to be stroked, I’m at your call, and on, and on

Goddess in cocoon, flesh-mate in caress, secret, soft in down
Transported, now, we can outlive, gently now, gentle you, and give, and how, just now

Shy, robust fragrance of peach, woman, discrete plum lust
Gush of halo, resting indulgent in patter of me, flatter me, lather me in whispers

Vonnegut understood this time, and you would understand it too
Basking in gardens, listless moments, ready to leap upon inspiration, waiting

I never trusted women, until she came along, now there’s only you
(She wrecked her car on the freeway, screamed hysterical, mourning a point already moot)

Following you, following me, in a good old fashioned stand-off
Face to face, shouldering obligation, holstering family, how will it turn out, who knows?

Giggles, baby talk, pinches, digging nails in buttocks, chirps, sleep
Dream I’m someone else, when I awake, holding you, you’re in someone else’s dream

Rushing about, picking caress off gossip, pitch of neighbor’s fence
Building fire storm with hug and smile, destruction calling me close, no more than I do

Bigger than me, the oyster is yours, blue pearl of your eyes
Cherish me, render me, naked in gold-black boundless flesh of this starry night

There’s no one else for me, and you, but you so smooth
Fidelity comes in confession of infidelity, addiction in rejection of past, goodnight

Conclude the paragraph, the verse, the breath, you knew that if
Being here was an experiment the ideal would always remain fiction, that’s right!

This, from an imperfect world, tired of suspicion, you still want him too
Promises, only couplets, spoken in a sinking craft, so when at last, I’m gone, I’m gone