Born in Toronto, Ontario, Meredith Quartermain spent her childhood in Ontario and the remote interior of British Columbia. At the University of British Columbia she took degrees in English Literature, English Language and Law. After practicing law for three years and then teaching English for seven years at Capilano College, North Vancouver, she left the world of paid employment to write and to run, with husband Peter, Nomados Literary Publishers.

Quartermain sat on the collective at the Kootenay School of Writing in 2000-2001, and her work has been loosely associated with the KSW. 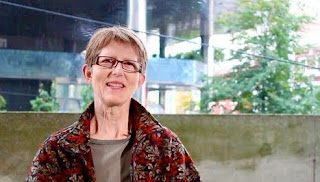 Her first book Terms of Sale contains both innovative poetry exploring the non-referential music of language, and poems of place concerned with city life and neighborhoods. Abstract Relations and Spatial Relations continue her exploration of language and innovative form, these works being sections of a longer work in progress shaping itself around the six major sections of Roget's original Thesaurus. The Eye-Shift of Surface is also highly experimental in its form, being constructed in verse paragraphs from materials listed under entries for the letter I and the word eye in the Oxford English Dictionary. The poem included in the present selection is taken from Wanders, a book that contains 19 poems by Robin Blaser with 19 "translations" or "transelations" (to use Erin Mouré's term) by Quartermain which replicate Blaser's syllable count and metrics.

With A Thousand Mornings, Quartermain combined innovative form and language play to explore the streetscape she could see from her window. Rachel Blau DuPlessis describes the book as "a serious-playful and engaging work in which she weighs and sounds what presents itself outside a real window, inside language, and through verbal-emotional associations. Written in pointillist phrases, diaristic, notational, associative, punning, funning and just following any track, the work sits down to itself: to the world, and to the self in time."

Vancouver Walking continues her exploration of city life, using what she calls "historical surrealism" to explore the power struggles engraved on the city's face. The book has brought her national attention, with the Toronto Globe and Mail commenting: "Quartermain's poetic tour . . . reads the downtown's every street sign and historical plaque to invoke not vagaries of weather or a sensitive narrator's emotional landscape, but the lived epic of how specific native soil became appropriated to a condition of contemporary real estate."

In 2016 Quartermain published a work of fiction, U Girl.

How be blasted in the dumb plethora,

for a carping lurched sideways

as schist from cockles under vox?

faith lose song to its ruckle

its ivy pace mulled to a sea saw

and pitchy – skip-jump to cuckoo corkscrew

and feathery vex under hubbub

while it churns oozy – hey, shebang

for a whoop teeter

Posted by Douglas Messerli at 2:02 AM