Lisa Lubasch was born in 1973 in New Rochelle, New York. She completed her undergraduate degree at Yale University, where she studied theater and literature, choosing English as a major. From 1995 to 1998, she earned graduate degrees at The Johns Hopkins University and The University of Iowa, where she taught and studied writing. 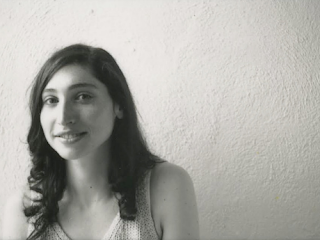 Lubasch’s first book of poems, How Many More of Them Are You?, was published in 1999 and received the Norma Farber First Book Award from the Poetry Society of America. Her second book, Vicinities, followed in 2001, and in 2002 selections from her work were translated into French, appearing as a chapbook in Un bureau sur l’Atlantique’s Format Américain Series. Her third and fourth collections of poems, To Tell the Lamp and Twenty-One After Days, were published in 2004 and 2006. In 2014 she published another collection of poetry, So I Began.

With Olivier Brossard, Lubasch has translated works by contemporary French poets such as Fabienne Courtade and Jean-Michel Espitallier, among others. Her own translation of Paul Éluard’s A Moral Lesson / Une leçon de morale was completed over a period of several years and was published by Green Integer in 2007. 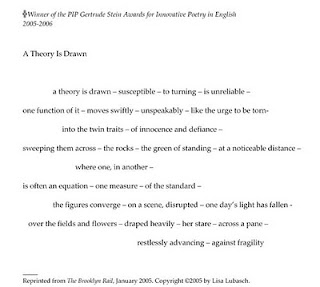 Go here for another poem:

Posted by Douglas Messerli at 2:32 AM