John Wilkinson was born in London, England; he grew up on the Cornish coast and on Dartmoor and endured a number of boarding schools. He read English at Cambridge, followed by graduate work at Cambridge and Harvard universities. Subsequently he trained as a psychiatric nurse and worked as a nurse, social worker and service manager in and around Birmingham, England, before moving to Swansea in South Wales as a lecturer in mental health. Thereafter he worked in the East End of London as a commissioner of mental health services, an assistant director of public health and a mental health strategic planner, while living for the most part in Cambridge.

In 2005 he moved to the University of Notre Dame, Indiana, as Poet in Residence at the Keough Institute for Irish Studies, and teaches both literature and creative writing for the English department. He is married to Maud Ellmann, an academic and literary critic. 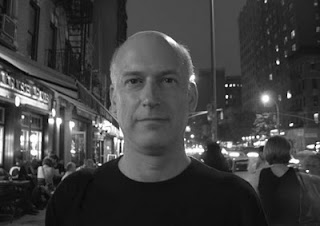 The Shoal of the Ditto Ship

One day he'll wake with wings

Or fixed gaze in vitro intro-

spects, centipeded they get tied

up through reefs, or riffing

smattered off the obtuse bulk

cast away legless, their cousin

pillows of puff, much touch

arrived-at Must I peel or empty?

Teflon Ted Whatever you say

locks the scarlet under skin,

as shame were that shame

brought up to its own mark,

then all is trussed & shut,

Tom to arrive at certainty,

veer not, shy off or scatter,

vent not the stacks imbibing

down within the voided grates,

cap them, since their terminus,

playing to their divisions,

This mush dons his quizzical,

this plate gurns, Robert this

slashes in my baked Alaska,

The order stops the tracks of

Leaning from her saddle, wee

Titania can bestow a blessing,

draws down the flues, follows

into the cold-box or cream

tugging behind The Upsetter.

at school you were dwarfed by

were shaken by a choice phrase

penguins of your cloud buttes,

heaps of bone, a coffin clutch

on his pillow, femurs guide

Girl you really got me now

craving eats from his big toe

looming over a fire-ant army

a kick in the hand stubs a bush,

pudency stamp. You're too rude

you rake, you fop, you mohawk,

you with your fab nose-bone.

Luke reeling at such vileness,

stashes books on a hearthstone

cleans up his act & itemises:

Gilgamesh perks up on cue,

Ulysses as per usual curious,

for the proverbial little press.

pokes into these roe deposits,

can they endure the light,

these vulnerable figures? How

leave no stain on its envelope?

against tears, against semen,

paid in full but fallen short,

prickling where the low cloud

muzzles against their moss-

sopped cocoons against the sky,

glitching up the brain stem.

None of the above applies

None of the above follows

welling between their wires,

but long in the tooth, bony,

searches for its porch & picket.

Do I see Johnny Appleseed?

Was that my casual gunslinger

reels on the deck with kuru,

sought to expiate his triggers,

triggers of the small mercies?

A novel variant stirs the rank

antibodies, you must be you,

hauls over the icecap its satchel

stuffed with props to scale

while the felt thickens, furs,

crushed by the saint system,

bring me my Negroni, swoosh!

promenades across the whole-

Felipe, I'll have your selection,

defend their right to adapt!

defend their right to adapt!

by these fibrous bunches

spongiform at base hey,

you trying to stick your nose

Know what's coming to you?

Say you pass the horseradish

clockwise while at home?

Insolent to waiters? Get lost!

rounds up misdeeds in flocks,

are hopping on marked paths.

the very trout who gasped

for oxygen in a stock-pond,

wallow on the sludgy floor.

puts spurs into the cladogram,

long solitude had made weird

frolics onto a new reserve,

a positive fit, a vacuum seal,

a win-win trade. So why do

peeking out of the manholes,

blow the cover rising to cover

the cover I cover myself,

I was a rush of released mice,

roaches from under the sink

milling towards a hot ticket

pullulate in their gung ho.

whisks gad round the sewers,

sumps lift up their gates, O

helicobacters mass in the gut

others pull in adverse ranks,

skirted round or blew apart,

these subverting their class,

lurking to buttonhole me,

brought all kinds of baggage.

I am the god of hell's cold

bones laid out to feed the fire

flaring back to cloud cover,

flaring round the polar vault,

snapped in a cold clamshell:

splintered were its runnels

below the roof-tree, DNA-

room is right, curse in order,

your details have been verified.

To such a desecrated altar

To this end, to this zilch,

the great cheese, the sponge,

petrifies anew its every unit

each with a miniature nob

going down to alphabet street,

jut their hips, the parasites,

the whole shebang, the circus

marches out of a mausoleum:

Here the autobots shall dock,

exiled from a bright matrix,

avowed but in chameleon

lock with the old regiment

crank till a cylinder aligns,

A mensch on a bender, Jack

on an even keel, shameless,

burns out of the marrow.

Consuela, mollusc was your

jabbering on my private bits,

ricochets but courses through

Moran, the night has no parts,

that's because you're asleep,

the fate of the crew of the

Alioth waits to be disclosed,

shaken from its bubble tissue,

sailor hallmarked with his year,

sluicing over the span, men

each in her cellular conclave,

the way we expect love to be,

millipedes in a single cohort,

an ethereal choir of gnats:

the clog dance of caterpillars

Of heldness and of caresses you

have become the entrepreneur.

Inside me was this longing

which did not belong. Nests

To read Wilkinson's Gertrude Stein award poem from 2008-2009, click below:

Posted by Douglas Messerli at 2:33 AM