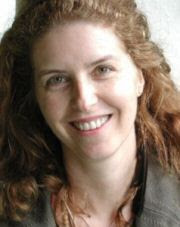 Claudia Roquette-Pinto was born in Rio de Janeiro in 1963. At the age of 17 she lived for seven months in San Francisco, completing a course in English and American Studies at San Francisco State University.
Back in Brazil, she worked in the fashion industry, first as a model and then as an assistant fashion producer. In 1987 she graduated from Pontificia Universidade Católica in Literary Translation. From 1986-1991 she managed Verve, a monthly dedicated to literature and the arts, which she and four college friends had founded.
She is the author of five books to date, Os Dias Gagos, Saxifraga, and Zona de sombra, portions of which have appeared in the English translation Shadow Zone. Her most recent books include Corola (2001) and Margem de Manobra (2005). She has also published numerous poems in anthologies. With Régis Bonvicino she co-translated Douglas Messerli's Primeiras Palavras (First Words) in Portuguese.
Roquette-Pinto lives with her husband and three children in Rio de Janeiro.

Selections in The PIP Anthology of World Poetry of the 20th Century, Volume 3: Nothing the Sun Could Not Explain—20 Contemporary Brazilian Poets (Los Angeles: Sun & Moon Press/Green Integer, 1997/2003); Shadow Zone (Los Angeles: Seeing Eye Books, 1999); selected poems in "Lies About the Truth: An Anthology of Brazilian Poetry," edited by Régis Bonvicino in collaboration with Tarso M. de Mélo, in New American Writing, no. 18 (2000)

if opened
with the surprising skill
of small hands
blind to such an alphabet
and if—itself brown—
the patch of skin bruises
even more than from foolish thorns
see how
the bud throbs:
she and she
unbuttons
between the fingers

from the shadow his face hurls itself forth
a fish
an african moon
floating above the worn and grey surface
the bald spot gave no hint
of the eyes lively
as water, so lively
they create before seeing
the prideful bull's brow
thrusts a split nose:
one side of the face confronts
the other withdraws
the rest is wrinkles and grimace
papyrus
and the sound of ancestral hooves

____
Reprinted from The PIP Anthology of World Poetry of the 20th Century, Volume 3: Nothing the Sun Could Not Explain—20 Contemporary Brazilian Poets (Los Angeles: Sun & Moon Press/Green Integer, 1997/2003), copyright ©1997 and 2003 by Green Integer. English language translation copyright ©1997/2003 by Michael Palmer.
Posted by greenintegerblog at 10:59 AM