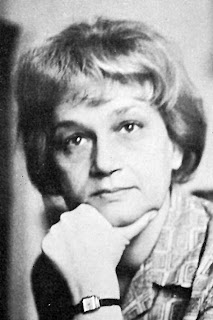 Born in Budapest to a family with Transylvanian ties, Ágnes Nemes Nagy studied Hungarian and Latin at the University of Budapest, but her "intellectual birth," as she puts it, took place at a Calvinist gymnasium for girls with the renowned poet, Lajor Áprily, at its head.
She began her career as an editor for the post-war literary review Újold (New Moon), which was banned in 1948. Her first book, Kettös világban (In a Dual World) was published and welcomed by the reviewers in 1946. A victim of the "szilencium," she could not publish again for nearly ten years. From 1953 to 1958 she taught in a secondary shcool. It was only in 1957, with the publication of Száravillám (Heat Lighting), that she came to the forefront of Hungarian poetry. After the publication of this book, she began to support herself from her own writing and translating works from German, French, and English.
Her third book of poems, Napforduló (Solstice), appeared in 1967, and brought her international attention. Other books followed, and in 1969 and 1981 she published collected works of her poetry, the first titled A lovogok és az angyalok (The Horses and the Angels), the second titled Között (Between). With her husband, the critic Baláczs Lengyle, she spent several months at the University of Iowa on a Writers' Visiting Fellowship. In 1983 she was awarded the prestigious Kossuth Prize. By the time of her death in 1991, she was recognized as one of Hungary's leading poets. She also wrote essays and poetry for children.
Nemes Nagy described herself as an "objective lyric poet," attracted to both objects and the objectivity of the lyric tone.

My contemporary. He died, not I.
He fell near Tobruk, poor boy.
He was English. Other names, for us,
tell the places where, like ripe nuts,
heads fell and cracked in twos,
those portable radios,
their poise of parts and volume
finer than the Eiffel, lovely spinal column
as it crashed down to the earth.
That's how I think you your youth —
like a dotard who doesn't know
now from fifty years ago,
his heart in twilight, addle pated.

But love is complicated.

This was the table. Surface, and legs.
This the wire, the lamp.
There was a glass to hand. It's here
This was the water. And I drank it.

Now I live round chairlegs,
reach the knee of objects.
Then I shouldered through a space.
And such birds, such space.
Like a flaming garland's
ruffled leaves, tearing, flaring
they flew, muttering in swarms,
driven by a pulse
as if a heart split,
flew into birdbits —
That was the fire. That was the sky

I leave. I'd finger
the floorboard, if I could.
Draughty. I dodge
in the street. I am not.


The Sleeping Horsemen
to Lajos Kassáck

December. Noon. Eye-scorching
snowfiled broad as a hillside.
On the flat slope a heap of flagstone.
On its round edges
a hot, white, snowsheet:
a small pile of sleeping Bedouins.

What faces are these that bend
groundward, dark shrubs,
in this inverted sculptural group?
What dried-up, black
root-features, what
hot, dark breathing —

And deep down under the shore
what kind of bedouin horses,
their shapes here and there heaving,
as inside the stable corridors,
silently, invisibly, they paw,
and their root-bearded large manes
begin to sway underground —

And what is this motion when
on the hot earth-horses' backs
the earthy brown trunks stretch,
leafy-haired, higher and higher,
and with one slow stupendous leap
spring out.

The great sleeves of air,
air on which the bird
and the science of birds bear
themselves, wings on the fraying argument;
incalculable result
of a moment's leafy silhouette
bark and branch of a haze living upwards
like desire into the upper leaves
to inhale every three seconds
those big, frosty angels.

Downweight. On the plain
the mountain's motionless shocks
as they lie or kneel
peaks and escarpments,
geology's figure-sculpture,
the glen's a moment's distraction
and once more the forms and rocks,
chalky bone to outline
into identity of pleated stone.

Between the sky and the earth.

Creaking of rocks. As
the sun's clear ores
into themselves almost, stone into metal, as
a creature steps on in his claws smoke,
and up above the escarpment
ribbons of burning hoof,
then night in the desert, night as
quenching and reaching
its stony core, night below zero, and as
the tendons, joints, plaques

split and tear, as
they are strained in endless
splitting ecstasy
by routine dumb lightning
in black and white —

Between the day and the night.

Aches and stabbings,
visions, voiceless aqueducts,
inarticulate risings,
unbearable tension
of verticals between up and down.

Between the sky and the sky.


Bitter.
It was bitter, the sea, when
I rolled through the rock-throat down
a spiral staircase. A shingle, I spun,
behind me the hum of snail-shell
like memory in an abandoned house,
I rattled
like a skullfull of shrapnel.

Then I rumbled out onto the beach.
And there were the statues.

On a pedestal
a leather-covered tortoise-egg:
my skull boiled boiled in the sun,
my white helmet rolled away
a bubble on the sand,
I was lying down, my shoulder against a rock,
in filthy filthy white array.

Whose is this hunk?
Who was it, from a mountainous shale-chunk
with monstrous passion hacked
this indifference out?

And the plates of sheet-iron on me, the sheet-iron.
Banged-up boxes,
as they reflected their stammering light,
—a plane-wreck glitters like this,
but inside what sirs still lives,
a smatter of blood on the watchstrap,—
I lay smeared out on the rock,
life—the filth of it—on a stone.

Salt and sand and above them the rock-hunk,
gouged out cave-like in the sky,
this relative eternity,
this half-light of minerals—

the water murmurs, murmurs, its bed an Earth:
bitterness in a stone cask.

All these things are the same. The mine.
A mountainside torn to the foot. Implements.
As he touches the limestone
the dawn's uncertain.
As if dawning from inside,
on the rock's thin face,
and stone and iron transparent
as after an ultimate dysfunction.

There the forest.
The fog walks about in fragments.
five-fingered, like abandoned hands
or hands that stretch up vertical,
a motion almost of traction
and yet of not reaching to their meaning,
they float palely to the ground
as they trail —
as they expand and tumble,
vaporous, attenuated trunks,
another forest walks among the trees
and drives another foliage.

A tunnel under the leaves.
Dark grass, gravel:
a set of narrow-gauge lines, at daybreak.
The sun is coming now, steaming,
piercing the fogs of a lateral angel,
mute rumbling recurs,
metal in the grass sparkles,
morning sparkles,
till suddenly a hedge springs up
for the lines end there in the grass.
Beyond, just a few sleepers
like unsteady steps ahead —
on the clearing the sun stays.

Fore-noon. Great plants.
The great chamomile meadow is still,
pieces of iron in it,
honeycomb density over it,
white-spoked plants the suns
white galaxy without waves and now wind.
Always. Forever. Noon.

"Revenant," "Between," and "Akhenaton in Heaven"
Reprinted from Between: Selected Poems of Ágnes Nemes Nagy, trans. by Hugh Maxton (Budapest: Corvina, 1989). Copyright ©Hugh Maxton. Reprinted by permission of William McCormack.

"The Sleeping Horsemen" and "To a Poet"
Reprinted from Selected Poems, trans. by Bruce Berlind (Iowa City: University of Iowa, 1980). Copyright ©1980 by the International Writing Program. Reprinted by permission of the University of Iowa.
Posted by greenintegerblog at 10:48 AM

holy cow, thanks for posting these poems!!!!! i hadn't come across her work at all, and these poems are stunning. will definitely seek out 'between'... great great stuff.