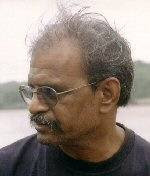 Born in 1942, Vasant Abaji Dhake is a Marathi poet, playwright, short story writer, artist and critic. In his poetry he draws inspiration from sources as diverse as Tukaram and Kierkegaard.
Dahake was born in the year that Mahatma Gandhi called for the British colonial regime to “Quit India!” and was five years old when India gained independence; accordingly, he grew up the turbulent 1960s, the decade that for India characterized great optimism along with an often paralyzing doubt. Locally, the country was in profound crisis after the death of Nehru; but the effects of international individuals and events—Martin Luther King, Jr., Che Guevara, Elvis Presley and the Beatles—helped to bring India into the context of the contemporary world. Dahake grew up in Vidarbha, the eastern heartland of Maharashtra, arid and hot, but the center of the Deccan culture that includes Brahminism, Buddhism and radical devotional sects such as the Mahanubhavas.

This region, the language and the people, is at the center of Dahake’s poems—particularly in his first volume, Yogabhrashta of 1972. With its metaphors of dryness and burning summer, Dahake characterizes his homeland in the images of rocks, roads, and mirages. But in focusing on his rural setting, he argues for a larger Indian vision that includes the private inspirations and political issues of his homeland as against the dominant claims of the metropolitan areas.
Although Dahake has lived now for several years in Bombay, his writing continues, in his newest collections, Shubha-vartaman (1987) and Shunah-shepa (1996), to develop the dialectic between Bombay and Vidarbha, with his nightmare-like visions of the city as opposed to the more private sufferings of Vidarbha. As poet and translator, Ranjit Hoskote has written of his work: “Vasant Abaji Dahake’s poems reverberate with the clash of opposites: they speak of the displacement of a solitary consciousness from the countryside to the metropolis, from the expansiveness of landscape to the constrictions of architecture, and the anxieties and the exhilarations that such a traumatic experience can produce.”
Dahake has also written two books of fiction, Adholoka (1975) and Pratibaddha ani Martya (1981).
BOOKS OF POETRY
Yogabhrashṭa (1972); Śubhavartamāna (Mumbai: Mauja Prakāśana Grha, 1987); Śunaḥśepa (Mumbai: Lokavānmaya Brha, 1996).
ENGLISH LANGUAGE TRANSLATIONS
Terrorist of the Spirit , trans. by Ranjit Hoskote and Mangesh Kulkarni (New Delhi: Harper Collins/Indus, 1992).
Posted by Douglas Messerli at 8:48 AM