Toby Olson was born near Chicago in 1937, but left there at a young age. Through high school and his four years in the Navy as a surgical technician, he lived in California, Arizona, and Texas. After finishing his B.A. in English and Philosophy at Occidental College in Los Angeles, he moved to New York City, where he received an M.A. in English from Long Island University. Olson taught at the Aspen Writers’ Workshop, which he co-founded in the mid-sixties, and at Long Island University and The New School for Social Research before moving to Philadelphia and Temple University in 1975. Today his splits his time between Philadelphia and Cape Cod, where he has done most of his writing over the past thirty-five years. 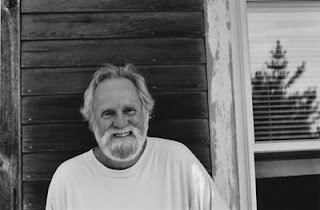 Olson began writing poetry in the early 1960s, but it was not until 1976 that his first novel, The Life of Jesus, was published (by New Directions). Seaview, for which he received the PEN/Faulkner Award for the most distinguished work of American fiction in 1983, followed, and since then he has published the novels The Woman Who Escaped from Shame, Utah, Dorit in Lesbos, At Sea, Write Letter to Billy, The Blond Box, The Bitter Half, Tampico, Walking: A Love Story, and the 2007 collection of stories, Darklight. Twenty-two books of Olson’s poetry have been published, the most recent of which is Human Nature (New Directions, 2000).

In addition to poetry and fiction, Olson has been collaborating in recent years with the composer Paul Epstein on various projects, including “Chamber Music: Three Songs from Home,” “Birdsongs,” and two chamber operas, “Dorit,” adapted from Olson’s novel Dorit in Lesbos, and Chihuahua. All of these works have been performed and recorded, and the first two are available on commercial CDs.

Adding to the PEN/Faulkner Award, Olson has received fellowships from the Guggenheim and Rockefeller Foundations, the National Endowment for the Arts, and other organizations.

Beyond the orchestrated placement of the child’s hands,

in one of a number of cities

where multitudes are allowed still to blossom,

men out of uniform at the periphery

whose burden seems light as a feather

as borne on the Prophet’s robes.

everything soon to be solved,

and above the newspaper,

streaking my windows and disordered thoughts;

along the gravel walkways,

as the world’s children, as if bathed in oil.

[Who would treat my body

to such soothing pleasure,

Better to have felt my limbs in their hands

at some earlier time.]

The grandmother once played by his gramophone,

a reversal of fortune, in a photograph

of a life spent wholesomely in a quiet town.

Bearers, can you spare a dime, for travel,

for the reversal of fortune of a child whose body

is quiet-town-wholesome, for a spent life?

[In a tape recording played by my grandmother],

on a gramophone, sisterhood to a spent life.

Is a dime given for quiet travel, wholesomely?

[I have nowhere to go, my grandmother’s quiet town?]

The river reverses the fortunes of fishermen.

The streets become littered with bodies and gramophones.

The repetitious recording of the river is vicious

who play gramophones along parkways and quiet streets.

[A dead town, a town for mothers] to spend life’s dime.

Those who are wholesome are heard only on gramophones

or on tape recorders, spared for quiet travel reversals.

The casual machine of childhood, a dime spun quietly

so that one listens to fortunes spilling from grandmothers.

Or from rivers of gramophones, wholesome fishermen who are

Each reversal turns littered streets to a spent quiet-town.

A dead town, a town or reversals and restrictions,

of a life spent on rivers littered with spent fishermen,

broken recorders. [I have nowhere to play, for fortune.]

The body is lifted now casually into the sun;

the grandmothers beat at their clothing.

Perhaps the flowers are falling

into the hair of the sisters,

the mothers who stumble

into the cameras’ perspectives.

But the bearers have been recorded,

these spent fishermen in this quiet town

[a dead town] of reversals and restrictions.

I am fortunate in this stormy day,

[If only it would rain

to silence my grandmother and her gramophone,

to wash away this spent litter.

If only they could spin

a dime for travel.]

My grandmother tells a story of reversal in a dead town,

a tape recording of the police chief, now a mortician,

his spent marriage, his son, his wife’s gramophone.

[I fly for refuge unto the Lord of the daybreak],

beside rivers littered with fortunes of dead children.

Reversal of a casual machine, the gramophone, multitudes

of pills to commemorate their union. [That He may deliver me

from the mischief of those things which He hath created.]

And rushes with his son on the spent dime, wholesomely

in the quiet town, passing rivers littered with fishermen,

tape recordings, photographs, everything soon to be solved.

No pills, but a barrel at her temple as the door opens again

and again, vicious repetition. [And let not compassion

toward them prevent you from executing the judgment.]

Now the litter is lowered down into the quiet town,

the body wrapped up in the flowers,

Yet the vicious recording continues

in photographs, gramophones of the grandmothers,

tape recordings of the sisters.

A dead town of the mothers,

everything soon to be solved

not by fishermen, seemingly strew flowers

on the unfortunate banks of reversed rivers,

not by the spinning of dimes spared

for quiet travel or arrival

into His taped presence

in a litter of gramophones along spend parkways.

A quiet town of police chiefs and morticians,

multitudinous as the world’s children bathed in oil.

A dead town, a town of reversals and restrictions,

of violent fortunes in gramophones and honeymoon litter,

so that a wife can spin dimes for a smoking barrel.

The repetitious recording of the reversed river is vicious

highway of the bearers lifting burdens on the Prophet’s robes.

Those who are wholesome are heard only on gramophones.

The casual machine of childhood travel, flying for refuge,

passing by parkways and rivers littered with spent fortunes.

The strewn fishermen, who might be fathers, are restricted.

Out of uniform at the periphery, photographs, on a dime spent

for litter of dead children, broken gramophones and mothers.

Sudden reversal of the casual machine, doth not prevent them.

[He will assist you against your enemies

and will set your feet fast, but not for travel,

that reversal of a fortune in my piggy toes.

If they had just

laced long fingers between them,

had oiled my body,

even with slick sludge

in rivers littered from passage of His

who is provided with everything

and suffers not the work of any worker.]

The rain releases its fortunes into the dead town.

Petals fall like bright dimes into the sisters’ hair.

The river reverses again and is cleansed of litter.

His grandmother’s gramophone and tape recorder are spun

on a dime quietly, for travel, for maps of the town

no longer viciously restricted to men out of uniform.

No longer restricted to police chiefs and morticians,

their sons, and their wives reversing fortunes of pills

for smoking barrels at the doorways of marriage motels.

beyond the barricades, everything soon to be solved.

The rain reversed the fortunes of the dead town’s creation.

A quiet town, rain water, burdens light as a feather.

In your last dream, He will lift you on the Prophet’s robes

and will admit you into gardens, through which rivers flow.

Posted by Douglas Messerli at 1:38 AM