Timothy Liu was born in 1965 in San Jose, California of immigrants from mainland China. With images resonating from the unlikely symbiosis of his Mormon upbringing and an emergent gay sensibility, Liu fuses the spiritual with the sexual in such collections as Vox Angelica (1992), Burnt Offerings (1995), Say Goodnight (1998) and Hard Evidence (2001). His fifth book, Of Thee I Sing (2004), was named a 2004 Book-of-the-Year by Publishers Weekly, its attentions focused more on world events than previously, a trajectory continued in For Dust Thou Art (2005). He has also edited Word of Mouth (2000), the Talisman anthology of gay male poets who wrote between 1950 and 1999. 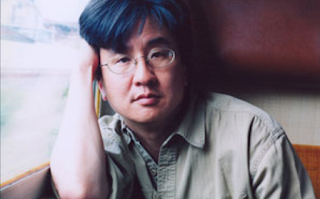 Having served as the Holloway Lecturer at the University of California as well as having taught at Hampshire College, Cornell College, the University of Michigan, and the University of North Carolina at Wilmington, Liu is currently an Associate Professor of English at William Paterson University in Wayne, New Jersey and a member of the Core Faculty in Bennington College’s Writing Seminars.

He received his B.A. in English at Brigham Young University after serving a two-year Mormon mission in Hong Kong. Liu received his M.A. from the University of Houston in 1991. “Under Pressure,” his master's thesis juried by Richard Howard and Edward Albee, was accepted for publication by Alice James Books in the Fall of 1991 and renamed Vox Angelica, which would go on to win the 1992 Norma Farber First Book Award from the Poetry Society of America. Vox Angelica, now in its third printing, recently appeared in a Slovenian translation and was released at the 2004 Ljubljana Poetry Festival. His poems have also been published in Arabic, Chinese, Polish, Romanian, Russian and Turkish translations. With a sensibility that is able to embrace a Mormon worldview and an unabashed homoeroticism, Liu has ventured into realms beyond the comfortable circumferences of both those warring camps. Some reviewers think Liu is essentially a religious poet precisely because he so capably embraces the erotic within the spiritual, in the deeper sense of religion-as-ligature, of religion as embodying the primeval forces of deep incarnational involvement with flesh and blood. With his journals and papers archived in the Berg Collection at the New York Public Library, Liu makes his home in Hoboken, NJ, across the Hudson River from Manhattan.

chagrined for having ever allowed chivalry’s mask to fall

had said “no need to reciprocate” as he undid my belt

parts on each of our bodies that must secretly go unloved

almost as much pleasure in going in than the coming out

Posted by Douglas Messerli at 1:57 AM