Born in Oakland, California, Bachand grew up in a large family of seven children. Her father, of French-Canadian extraction, was an attorney and later a municipal judge. Her mother, a school teacher, kept close ties with friends living in a nearby convent.
Bachand attended Cowell College in Santa Cruz, California, where she studied with Norman O. Brown and was awarded a Bachelor’s degree with honors. She moved to Marin in 1975, where she worked first as a housecleaner, before working as continuity and camera reports technician on the film Black Stallion. 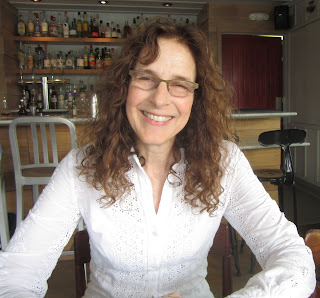 In 1983 Bachand and her family moved to the Los Angeles area, where her primary focus was raising her two girls. As her daughters matriculated through school, Bachand worked in various volunteer positions at both the Seeds University Elementary School and Marlborough High School. In 1996 she also worked as a volunteer at the Venice, California-based literary arts center, Beyond Baroque. Bachand was an intern copyeditor and proofreader from 1996-2000 at Sun & Moon Press and, later, at Green Integer.

Throughout these years, she wrote poetry and involved herself in the local poetry scenes. But only after her involvement with publishing did she begin, reluctantly, to show her writing to others. luce a cavallo received Green Integer’s Gertrude Stein Book Award for 2005, selected by Luigi Ballerini. In this work, which characterizes much of her writing to date, the structure is determined, in part, by various movies from the mid-1960s to mid-1970s, a period which the author describes as creating exciting director-oriented works that, ironically, have been credited with saving the studio system. Her unpublished work includes a project using the daily newspaper as a means to create a common palette of words. In 2004 Bachand moved to northern California, returning recently to Los Angeles.


what is the epitaph
for both
martyr and pimp?

let the countess
despise the grocer
robbed
of his false teeth


PERMISSIONS
____
Reprinted from The PIP Anthology of World Poetry of the 20th Century, Volume 5: Intersections—Innovative Poetry in Southern California (Los Angeles: Green Integer, 2005). Copyright ©2005 by Thérèse Bachand.
Go here for a selection of other poems: https://www.makhzin.org/issues/dictationship/the-pantone-series-select
Posted by Douglas Messerli at 1:45 AM

I loved the poetry
I would love to catch up with you after all these years
The last time ws in LA many years ago, over dinner & Cointreau
Love from your Aussie friend
Carol Paterson