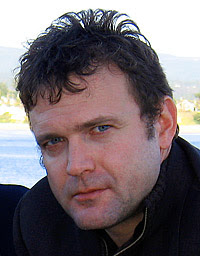 Stephen Cope was born in Houston, Texas, in 1970, and lived briefly there and in Ohio before moving with his family to Santa Cruz, California in 1977. He received a B.A. in Literature from the University of California, Santa Cruz in 1996 and a PhD in Literature from the University of California, San Diego in 2005. He currently teaches literature and writing and Drake University in Des Moines, Iowa, where he is a Visiting Assistant Professor of English.
Cope’s publications include three chapbooks: to be alone… (Santa Cruz: We Press, 1991), Two Versions (Buffalo: Meow Press, 1999), and Versiones Vertiges (Buffalo: Meow Press, 2000), although he is perhaps best known for his work with George Oppen’s unpublished “Daybooks” and “Papers,” a critical volume of which he has edited and annotated for the University of California Press. Numerous selections from this volume have already been published — most notably in Robert Creeley’s edition of the Best New American Poetry 2002 — and in 1999 he delivered the George Oppen Memorial Lecture in San Francisco.
Cope is also known for hosting memorable poetry readings and reading series’ in Santa Cruz and San Diego. He served for years on UCSD’s “New Writing Series’” committee and, with Joe Ross, founded the “Beyond the Page” reading series in downtown San Diego in 1997. Cope has previously been an editor at We Press and Zazil magazine, and, with Eula Biss and Catherine Taylor, recently co-founded Essay Press, an imprint devoted to publishing book-length works of innovative non-fiction writing.

language I am haphazardly identical
with