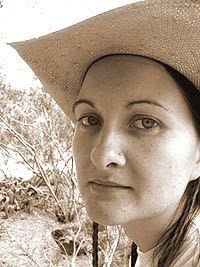 Sarah Vap was born in Wichita, Kansas in 1972, then grew up in Montana. She attended Brown University, receiving her undergraduate degree in English and American Literature. She passed a few more years in Montana, Frankfurt, Germany, and Richmond, Virginia, before moving to Tempe where she completed her M.F.A. in Poetry at Arizona State University in 2005.

While there she studied with Norman Dubie, Cynthia Hogue, Jeannine Savard, and Beckian Fritz-Goldberg. She has taught creative writing at Arizona State University and Phoenix College, as well as to 1st through 12th graders with the Young Writers Program, A.S.U.’s Programs for Talented Youth, and the Arizona Commission of the Arts educational grants.
Currently a poetry editor at the journals 42opus (an online journal) and 22Across (a journal of kids’ fiction and poetry), she also served as co-editor of poetry at Hayden’s Ferry Review. She has won several grants and awards for her poetry, and has published poems in journals such as Field, Barrow Street, Denver Quarterly, Wascana Review, Diner, SHADE, The Fiddlehead, and Natural Bridge.
Her manuscript Dummy Fire, chosen by Forrest Gander, won the 2006 Saturnalia Poetry Prize and American Spikenard won the 2006 Iowa Poetry Prize.

turvy is too sweet a word. grapple,
topmost—as if we carry the fate

of humanity on such-and-such
in a dwindle. that’s better. or,

swirls, that basic. so
happy it’s painful. we kilns

chafe—our secret
plan to redeem the world. and not right

then high haunts. supplicants.
when we jump

away from each other, middle
of the night.