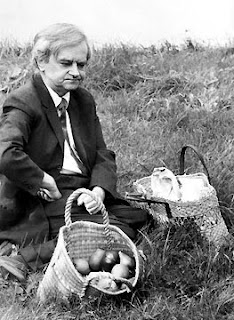 Don't mind if you die. It's just your body's shape,

intelligence, separate beings which are passing.

The rest, the final and the all-embracing

structure receives, and will absorb and keep.

All incidents we live through, forms we see,

particles, mountain-tops, are broken down,

they all are mortal, this condition shows,

but as to substance: timeless majesty.

The soul is that way too: condition dies

which help to fish the pieces from the drift

and make it sicken—but, what underlies,

all elements that wait in permanence,

The Colonnade of Teeth, where you have entered,

and the scarlet carpet you step on: your tongue.

You can look out of any window of time

and catch sight of still another face of God.

Lean out the time of sedge and warblers:

Land out the time of Moses and Elijah:

Lean out of the time of the Cross:

Lean out of your own time

God is old, bent over a book.

man hangs in the blue sky with flaring hair

and the earth trundles over the soles of his feet.

The one who sees

has sleepless eyes he cannot take from man.

No sugar left for the child:

he stuffs himself with hen-droppings and finds what's sweet.

If you make hell, plunge to the bottom:

heaven's in sight there. Everything circles round.

And look at the tree: depth and height raying from it to every

itself a road, to everywhere!

Once you emerge from the glitter of the last two columns

the cupola your hair skims is then infinity,

and a swirl of rose-leaves throws you down,

and all that lies below, your bridal bed: the whole world—

Here you can declare:

And the storm of rose-leaves will smile:

"But I believe in you: are you satisfied?"


Posted by Douglas Messerli at 2:05 AM