Robin Fulton grew up in Scotland the isle of Arran, spending almost four decades on both sides of the Highland Line. His father’s people were from the Borders, his mother’s from Sutherland and Caithness. He attended primary school on Arran and in Glasgow, secondary school at Golspie in Sutherland, and took an M.A. and Ph.D. at Edinburgh University. He has been a resident of Norway for three decades, living in a way on both sides of the North Sea. 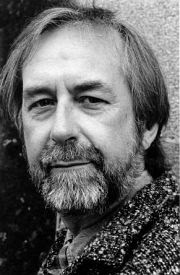 Between 1967 and 1976, Fulton edited Lines Review and associated books, and he held the Writers’ Fellowship at Edinburgh University from 1969 to 1989. A Selected Poems in 1980 gathered work from five early collections and was followed by numerous other collections.

He has also published two books of criticism.

In the last few years he has written under the name Robin Fulton Macpherson.

how often, a few trees recognised

as in my time, meant to look not old

not new. In a gap between moments

that threatens never to close again

I have no present tense. There’s no room

left in the past for more of the past.

Much has fallen into the future,

which never stops containing nothing.

It’s an oyster-catcher – screeching out

of a present tense which leaves no space

for past or future – that breaks apart

this afterlife I’m no longer in.

Once more I’m hurrying towards it.

Posted by Douglas Messerli at 2:31 AM