Born and raised in Brooklyn, Robert Kelly entered the City College of New York at the age of fifteen, and became a graduate student in medieval studies at Columbia University at nineteen. Since 1962 Kelly has been a professor at Bard College, offering him a stability of life that has allowed the production of numerous books of poetry, fiction, and essays.

Kelly began writing in the late 1950s and early 1960s, associating himself with a circle of poets that included Paul Blackburn, David Antin, Jerome Rothenberg, Armand Schwerner, George Economou, Diane Wakoski, and Clayton Eshleman. For a brief period Kelly and Rothenberg, in particular, were associated with was described as poetry of the “deep image.” In the early 1960s Kelly edited two short-lived magazines, Trobar and Matter, which brought him further attention and associated his work with the free-verse poetry of the tradition of Charles Olson, Robert Duncan, and Louis Zukofsky. 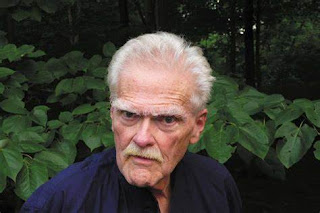 From 1967 to 1973, he was associate editor of Caterpillar, where he featured contemporaries such as Gerrit Lansing and Kenneth Irby as well as introducing younger poets such as Thomas Meyer, Richard Grossinger, and Charles Stein.

Kelly’s first book was Armed Descent of 1961, and over that decade he went on to publish 19 volumes of new poetry. In the years since, he has continued to produce numerous volumes of poetry and 10 books of fiction. He has received a number of major awards, including the Award for Distinction from the National Academy and Institute of Arts and Letters in 1986 and fellowships from the National Endowment for the Arts.

Jesus Speaks to the Wandering Jew

You’re the only one who understood.

We are travelers, that’s all.

Our best instruction is: to be gone.

Shake off the dust of the town.

We leave each other constantly.

No temple, no sacred mountain,

people trying to think their way out.

I said: Wander till I come

find you again. But I will never come

back. Always only ahead.

You are the only one who knew me,

knew where I was to e found, never, forever,

nowhere, and found me there,

mist in the trees and surf pounding at night

but no ocean by morning.

I climbed a tree

and you hurried to join me

Hurry is part of it. For me too.

I can’t get there till you come

too. You are the one

I came down to see,

talk to just one minute, flee.

You and only you.

That is what I mean.

Now when men se you in Adrianople

they say “You look no older than when

their father saw you in Odessa.” And when

men see me in Donegal or Chicago

they say “We don’t know you at all.

must have gone away long ago,

you have no business with our solid lives.

You are a shadow. We don’t know you.

Maybe we do need a new religion

where to men meet and join and part

linked forever by their little time together

then go their separate ways.

Maybe that is what always means:

they go all ways.

We are gone from each other

We had our own strange little story:

you saw me, you spoke whatever

came into your head, I heard, I spoke,

you heard and we are forever.

or Po Ya the luetnist and his friend Chung—

He smashed his lute.

we put in a friend’s hand,

leave it to him to throw away

God is a broken lute. Hurry tell we come.

For a selection of Kelly's poetry, read by the poet, see the PENNSOUND entry below:

Posted by Douglas Messerli at 2:09 AM