Born in Antwerp in 1960, Peter Holvoet-Hanssen worked as a caretaker of marine mammals in the Antwerp zoo and as a counselor in a shelter for homeless people before his famous poetry debut of 1998, the collection of poems, Dwangbuis van Houdini (Houdini's Straitjacket). That book won the Flemish debutant prize of 1999.

Stromboliccio of 1999 and Santander of 2001 quickly followed, making Holvoet-Hanssen a well-known figure in the Flemish poetic world. 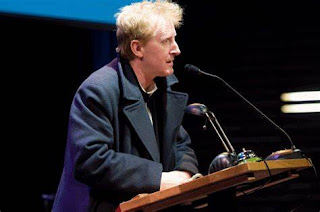 His heavily theatrical performances of his work, often for children and with his wife Noëlla Elpers, engage his readers with accessible humor and emotional expression that, at times, seems at odds with the adventurous explorations of his work. Yet the whole, often including musical accompaniment and props, take the work to a more emotional level.

In 2008 we won the Flemish Culture Prize for Poetry and in 2010 he won the Paul Snoek Poetry Prize.

Holvoet-Hanssen has also written fiction, De vliegende monnik (The Flying Monk, 2005) and has translated Rimbaud and others from the French. His most recent poetry collection is Navagio, published in 2008.

Roza and the Moon

The moon is a boy and yet he’s cute

he peeps from under the clouds

but I sleep under the sheets.

He sings at an impossible hour:

‘Nought are the stars, nought is the moon

it’s off to bed the stars must soon

but it’s time to wax for Jack ’o Light Moon.’

He mangles in a loud voice:

he’s at the centre of things.

for the moon of Manakoora.’

stew the piggy with the longest snout

for the moon is in the clouds, lies

asleep in my bed of roses.

Song for the Dead

Upsadaisy. From hobby-horse to hearse over the cobblestones.

It drizzled when grandmother was buried.

In September her daughter scrubs the grave though no one

ever comes by. My knees are ruined, she muses. So many

wasted years. If I ever get Alzheimer’s, give me a jab. Or:

in the cemetery. When my time comes, I’m going to let myself be

In the mist above the graves: a little room at her house. Grey

dove stares at the tube, doesn’t recognise her. ‘I only get twenty

degrees and the TV guide offers only lousy programmes. You’re

not sleeping with that man from downstairs, are you? How could you? He’s

to the swans. The skies are heavy, the mud sucks. Arthritis

in the shoulder. Quickly back to the house.

A radio drama in the living room. Nobody listens.

The hit parade. Anti-wrinkle cream. And a rosary in the drawer.

The Curdling Reverence of Captain Grapplehook

I break myself down, build myself up.

Tack aback and then flip-flop.

Foam at the chops.

‘Avanti. From lava to spumanti.

Other suns, other planets.

Mortals that know of no stopping, brave the high

survive an ordeal by fire with senses reeling

It rose up from the very ocean floor

till the ice cap melted and cracked over Europe, it flew

along the hugest horror to the weakest wail

standing by the Cathars, dancing over funeral pyres

on a Flamethrower with a bayonet

with the 15-inch-howitzers hacking on the cold

sank alongside G. E. Ellison, lancer, the last to fall

mixed in carnal knowledge and then took root

in forgotten graves—Solferino, time after time

The Princess in the Glass Mirror

In every stage of life is given

A warning voice, it speaks from Heaven

King Rat in his air balloon coloured everything in his flight: a

Friesian cow became a Belgian flag, mooed in shock until

it rained frogs. But still there fell no pennies from heaven.

A lamppost that waved and betrayed a young couple to death. After

25 minutes the girl was reanimated. A white dove that

flew against your window the night she departed this life. Did she call

on the emergency frequency? The dove on the roof stared at you. Don’t ask

why. Coincidence or no coincidence: that wavelength. Inflation everywhere.

In youth it whispers as a friend.

Is she still alive, pearl-fisherman?

She is still alive.

In joy and grief, in ease and care,

In every age, prepare, prepare.

Two weeks later he lay on the lawn. You tattered and torn.

to the other side of the world to make it dark.

Ice on fire. Mouse in trap. What song haunted your head?

Come, father, come on home with me.

Her pony mourns and dances to the thunder. Silverplate green.

Around her starry bed the family flattened like the clouds.

The magic lantern has been put out.

Somewhere she can hear me still, she thinks.

Is she dead, child on the pier?

Cloud formations are on the move in constantly changing shapes

look, a dog stretches out its paws and now stands upright

with their shadows the phantoms crawl up the hills

and wet the patchwork quilt, my love, until the sun colours the mountains

mauve like my head, stampeding and balding as the rocks

maybe also Fergus who was foaming from laughter even

stones can’t die his daughter said they just get

of disavowing in the water above the vanished houses, the V

of the deserted village past the V-shaped traffic signs

in the V-valley where I will find you: I bring the virgin fire of

your song into virtual safety, invisible to the hunters of the night

hideout is, with the waves that I can hear even though I can only

see them one by one in feverish dreams, with the cliffs where it rains upwards,

I go on looking for you: under a patch of fog, under a rainbow

you flash between the opposing poles of life, singing for the

victims of the famine, fodder for the dogs, fodder

I attack a car for here the roles are reversed

you crash into a farmer, pay the cow and wires in the sky

are for the rooks – a V gate keeps livestock out; there

you sit by the well studying the harebells, you fly up

Void of division you fiddle above the V cleft, you warble

hey Paddy, I’m taking the piss, come vanish with me

must engrave this statue deserted

hello my lily under the thorns

draw aside the curtains will you

I kiss your neck, thank this peaceful

moment, see how your waking

eyes light up: gleam of a lake

shards of Kabul a mirror

from Lipari nothing to beat them

of saffron; the sun rises, the

kettle shrieks, I bring you coffee

by the buddleia, blood as wine

fetched a toddler from the rubble, ay

death when living and mad with pain

"Roza and the Moon" and "Song for the Dead"

"The Curdling Reverence of Captain Grapplehood"

"Solferino" and "The Princess in the Glass Mirror"

Posted by Douglas Messerli at 2:02 AM