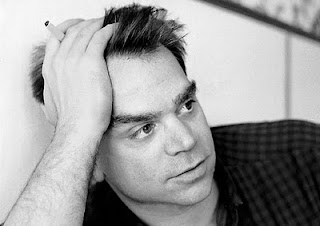 Born in Alma, Michigan on August 7th, Peter Gizzi grew up in Pittsfield, Massachusetts. After taking three years off after high school to work in a factory and to help with emotionally disturbed adolescents, he saved money to travel abroad and eventually moved to New York City, where he waited tables and earned his B.A. in Classical Literature from New York University. He also holds degrees from Brown University and The State University of New York at Buffalo.
Among his publications are Some Values of Landscape and Weather, Artificial Heart, and Periplum and Other Poems 1987-1992. He has also published chapbooks, folios, and artist books, and his work has been translated into several languages.
In 1994 he was awarded the Lavan Younger Poet Award by the Academy of American Poets, and he has received fellowships from the Howard Foundation (1998), The Foundation for Contemporary Performance Arts (1999), and The John Simon Guggenheim Memorial Foundation (2005). He has held residences at The MacDowell Colony, The Foundation of French Literature at Royaumont, and the Centre International de Poesie Marseille.
He was the editor of o•blek: a journal of language arts, The Exact Change Year Book and The House That Jack Built: The Collected Lectures of Jack Spicer.
He has served on the faculty at Brown University (1993-1994), the University of California, Santa Cruz (1995-2001), the Jack Kerouac School of Disembodied Poetics at Naropa (1998), and The University of New Orleans Summer Program in Madrid (2004). He currently teaches at the University of Massachusetts at Amherst.

Why shouldn’t it begin at midnight
when the doorman is asleep in his lodge
and the spinning chrysalis in perfect equanimity
with earth, slippers under the chair,
toothbrush back on its thingy.
If tomorrow were promise, then tonight is real.
Let us pray before the bearded poplar
morphing in up-late celestial wonder.
Celestial wonder inscribed on sleeping lids.
I wander through doors and cascade in noise.
Libraries tower in their occult light.
Yes, solar wind, now windows bloom,
the body waves beyond itself.
Not all speech unuttered equals silence
nor a dropped curtain signals an end.
There are sudden days, every animal secure
in one virtue. The bedrock vision
and the road unraveling, gentle traveler,
the great thing is about to begin.