Peter Cater (England)
1955
Peter Cater was born in Hampshire in 1955. His early years were spent in Paris, Germany and then in Kent, prior to gaining an open scholarship to New College, Oxford, to read English in 1973.
While there he began to take poetry more seriously, and a handful of his first mature poems were published in university magazines. As President of the Poetry Society he encouraged a wider appreciation of Eastern European poets, including Miroslav Holub and Zbigniew Herbert. Subsequently, he spent six years in Wiesbaden, Germany, where he combined teaching English with the development of his linguistic ability to the point where he could read in the original Kafka and Paul Celan, both formative influences. 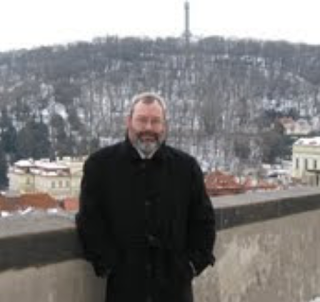 After his return to the UK in 1986, he took up a career teaching English literature in London, which continues to the present. His more recent work is informed by his passion for music and the visual arts, again with an emphasis on Slav culture, but also by a response to landscape, particularly the unique atmosphere of Dartmoor in the South West of England, with its fascinating and enigmatic pre-Roman archaeology. Other places which have a bearing on his poetry and outlook are Prague, Moscow and St Petersburg, frequent ports of call when not getting away from it all in the Slovenian Alps.
A number of poems, largely from his Oxford years, were recently published in Green Integer Review.
Posted by Douglas Messerli at 7:35 AM