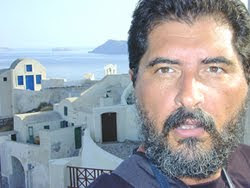 Born in Naples, Italy in 1954, Pasquale Verdicchio was raised in Vancouver and Victoria, British Columbia. He began publishing in his early 30s with Moving Landscape in 1985, published by the Canadian press, Guernica. Guernica also published his second major collection, Nomadic Trajectory in 1990 and Approaches to Absence four years later. His most recent collection, The House Is Past, was published by the same press in 2000.
In 1986 Verdicchio became a professor of literature and writing at the University of California, San Diego. He has published several translations of Italian poets, including Antonio Porta, Giorgio Caproni, Pier Paolo Pasolini, and Alda Merini, and edited a small publishing series, Parentheses Writing Series. More recently, he has headed a program in Italy for the university.

The landscape is moving.

Cut from the landscape
we move toward it
to suture the wound
--hills not remembered
are fluid fragments: water
mirror

My eye the cutting edge
upon which the landscape flows;
excised fragment in hand
everything else fallen
until the landscape turns
upon itself, upon me (the space
I once occupied)

then it moves across the desert, fast,
rolling over, smooth across,
just above the surface
of spiny desert plants
digs deep to find the fissure
has always been present—space
into which seeds were not sown

no voices and a house
not on any street, and secluded
by trees and shrubs; this is the house,
engulfed by the smell of ink,
pen in hand,
I rest in the dark.

The landscape
is the cutting edge
upon which everything falls.

A photograph and your smile.
Mistakes could be redeemed
clutching flowers and maps a sense brought on
by sunlight it just occurred to me
stumbling falling for some sign your thighs in Athens
your breasts in Mediterranean water.
Telling it so far apart
a bland taste of distance habitation or absence
a representative authority in geography

A bird calling to itself
calling itself by your name

finding it hard to keep up; ankles have lost their feathers;
no longer the keeper of languages; impossible now to keep
faith in charts the sky no longer visible

there are no more stories to tell
the heat that emanates is transformed
negation interruption the meter
is disrupted tension dissipates.

Speaking calm kept for cover
the signs that go forward and recoil,
line in equilibrium, profiles of animals.

From time to time
and the process of deciphering the angles;
wake up later than ever
to have a look at what calls itself
back; further on the idea of thunder
breaks through, given up by boiling waters
one prelude of investigation toward

An illusion of absence provides a key
for the collection of space.
What the landscape incites us to
- the drift defines itself as singular:
never a body doubtless a disguise.

Ignoring the centrism a declaration
and deficiencies; an assumption
of power investment of body and force
informing itself and what must be reclaimed

the desert in bloom overnight to have a look

Often a division of guests results
in diverse approaches. You attend lectures,
enter rooms at set times
with your partner or guest of choice

The field narrows as the evening progresses.
Daughters maybe sons are waiting.
Basic science tells them to set aside
the handled crosses and weary saints,

come toward a more palpable prayer.
There are moments to be cradled like children,
all different one from the other,
which halt the grip of occasion.

There are ears in the fields.
An easel placed in one corner speaks volumes.
Portable representation a warning.

What was shredded and occupied
by no means sacred to all.
Easy to recognize even through voices.
Use an already existing quote.

Only hours away in retreat.
Talk of the town circles back.
Someone is taking things into their own hands.
A practical consideration: the answer is no.

A brief arrangement of miracles,
regulations and decrees outline the sequence of severity,
and trial of testimony, eyewitness
in absence of divine approval;
usually flight or levity is a rule
not of the comic sort.
And best of all offerings predominate,
body parts, eyes, breasts, and such other jealousies
in which we materialize bodies, distanced
from spirit they seem to take a life
of their own. Very little prodding needed,
in a trance the pain ceases.

Saint Agatha’s breasts.
Saint Lucy’s eyes.
Culture is a matter of subtraction and offering.
the river of blood
no longer runs through veins blessed,
halted by faith in halting
and never doubted the extension of
divine tourniquet to stem the flow:
touch razor sharp icons and sacrifice.
But it was somewhere else that I heard
flying above my head, truly believing,
the chance it might entail,
the opportunity missed,
if only for a brief instant of apparition,
were to actually appear, I would miss it
so as to concentrate on its silence,
on its bright absence above my head,
on the illusion of its invisible pressure.

Each day a name,
and name’s sake, and saint’s day
every and each name a day;
in calendars the stories tell
themselves by allusion for those who bear
the names handed down by fathers
and mothers; the continuance of small
the role of belonging.

Such reflections are in the end
possibilities of worship and the capacity
of things to darken,
fall as shadows over the sight of believers.
With the humility of an insect,
with the deception of one’s self;
a time of seeing beyond blessings and curses
that colour the permanence of childhood.

Racist, sexist, polluter, murderer, destroyer,
warmonger, politician, deceiver, liar,
the single spin in favour of some menacing evil
hard bigot senator shithead.
Self-sacrifice for the good of the people,
martyrdom at a high salary,
advisers and detractors
defenders and offenders;
it’s the process
it’s the procedure
it’s not the issue
it’s the delay
it’s the way
it’s their fault
it’s too late to talk.
The patron saint of politicians?


Glassed Over, from “Filmic”

A young couple meets. Obviously the man cannot be trusted. The building is very high and the fall proves acceleration. Varying angels are clever devices. It could be any city on the east coast. But the skyscrapers serve as a hint. The reflection of the sky and surrounding walls in her eyes as she falls.

There are no friends who could witness. There are no souvenirs to speak. Of letters it’s the same. A fast track affair. A question of errors along the way.

Sooner or later he will make a mistake. He will surely fall for himself. He will most likely do so on purpose. Set the trap and activate it. No one will believe it. He will tell everyone he set himself up to fall. Or maybe he should just go on as he is. Why should I make it easy, he thinks.

A clever fellow, he assumes another identity. The new self suits him better than the old. He has erased his family and himself. No one will miss him, he is certain. Time passes.

An effigy is something someone else constructs. It can be specific or general. He is not an effigy of himself. An effigy is headed toward destruction. He is headed in the opposite direction.

He wakes up at night in a cold sweat. There are whispers. The same whispers he hears every night. He walks to the mirror and stares back at himself. All right, he thinks, there is no kidding you. He wakes up in the morning not knowing how he got back to bed. Maybe the voices are only a dream. The last thing he remembers is refusing to answer.

He reminds himself
that the story could be written down and that way he would be more certain as to its meaning
or
that the story could be a dream in which case he has nothing to worry about except getting some sleep and he knows a rest will do him good
or
that he is afraid to call her just in case the story is not just a story but is a true and actual event.
He decides to explain it to himself later.

There is another lapse of memory. This time from a bridge. A Pythagorean displacement. A body in a body of water. One body replaces another in his actions. He does not know if these are his actions.

The story takes a turn. It is someone else he remembers. The turn is too sharp and the bakes fail. The new body is trapped in the flaming wreck. This body, and the bridge body, and the body of initial falling are related. His obsession is clear but without reason.

There are no examples that he can think of and none that he can use as a lie. He resigns himself to a bodily accumulation. An average person in an average situation.

from “Feuilletons”
Reprinted from Isthmus (Los Angeles: Littoral Books, 1991). ©1991 by Pasquale Verdicchio. Reprinted by permission of the poet.

“Incomplete Sealines,” “Errors,” “Impossible Saints,” and “Glassed Over” from Filmic
Reprinted from Approaches to Absence (Toronto: Guernica, 1994). ©Pasquale Verdicchio and Guernic Editions. Reprinted by permission of Guernica Editions.
Posted by Douglas Messerli at 8:10 AM