Born in Athens on July 29, 1919, Míltos Sahtoúris regards his place of origin as Hýdra, the home of his great, great grandfather who was an admiral in the Greek War of Independence. Sahtoúris' father was a State legal consul, and his job soon necessitated the family's move to Thessaoníki, and later to Náfplion and back to Athens when the poet was five. But during the summer Sahtoúris was sent to the family estate in Pelopponesos, opposite Hýdra, where he fished and hunted in the woodside. As a youth he attended the University of Athens, studying law, but upon his father's death in 1939, left the university with a degree and burned his books.

As a student he had despised Greek literature, particularly poetry (with exception of Cavafy and Kariotákis). But during his first few years in the university, he published a small volume of verse, The Music of the Islands under the pseudonym Míltos Hrisánthis, but which he later rejected as juvenalia. In 1994, however, he became compelled again to write. But this time his work was influenced by Greek surrealism, represented particularly in the poetry of Níkos Engonópoulos and Andréas Emberícos, and the early work of Odysseus Elýtis. Writing to translator Kimon Friar, he wrote "Surrealism freed me from many things. It freed me, first of all, from an austere paternal education and from a narrow family tradition. As a technique, it taught me to listen to what's genuine in poetry and to use all words fearlessly." 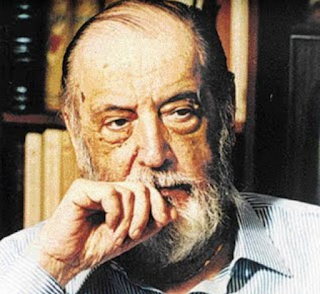 Since morning I've been looking upward at a better bird

Broken water glasses on the rug

crimson flowers the cheeks of the prophetess

when she lifts the dress of fate

something will grow out of this joy

a new tree without flowers

or an innocent new eyelash

or an adored word

that has not kissed forgetfulness on the mouth

Outside the bells are clamoring

outside unimaginable friends are waiting for me

they lift a dawn high and twirl it round

what suffering eyes what women

what loves what voices what loves

friend give me your hand what cold

I no longer know the hour when they all died

and I remained with an amputated friend

and with a blooded branch for company

He sprinkled ugliness with beauty

he book a guitar

and walked along a riverbank

He lost his voice

the delirious lady stole it

who cut off her head in the crimson waters

and the river rolls

the tranquil head with its eyelashes closed

Boys undress in the light

throw the ball and shout in triumph

a Frankish priest points with his fingers at Lycabbétos

a naked boy smiles at the girls

they grow tall in their branches they shout

afterwards they plunge in shame in the red water

Young women undress in the shadow

in the endless harbor frightened

a surgeon on the balcony opens and closes his lancets

to cut the ship's cables

to ear the unvirginal dresses to tatters

to mutiny and hang the captain

from the large mast of the sky

for women to clench their fingers

to close their eyes to sigh

to show their teeth their tongues

The voyage of joy begins

The suffering woman undressed in the dark

she swarmed up the wretched house and

she laughed in the mirror lifted her hands

painted her face with the color

of an expectation saw the sun

in her watch and then remembered:

"Look, the poem has come true

and the illegitimate boy and the color

make a gift of joy

and how can they photograph this place

it is a place of hypocrisy

it is a land where boys

who have lost their innocence lie in abush

and spread out their hands to the open windows

that the young short-lived orphans

squeezing in their wounded hands

a tuft of white hair

From the very ancient dream"

This furrow is not a furrow of blood

this ship is not a ship of storm

this wall is not a wall of senuality

this crumb is not a crumb of holiday

this dog is not a dog of flowers

this tree is not a tree electrical

this house is not a house of hesitation

They are a spoonful of sweet wine the vigor of foy

for the life of the forgotten woman

The forgotten woman opens her window

she opens her eyes

trucks with women dressed in black pass by below

who display their naked sex

who one-eyed drivers who blaspheme

by her Christ and her Virgin Mary

the women in black wish her evil

and let them throw carnations at her steeped in blood

from the effervescence of their sensual gardens

from the evaporation of gasoline in a cloud of smoke

tear through the cloud and call her prostitute

but she a Dolorous Virgin

with her beloved amid the icons

precisely as time has preserved him

with the candles of all the betrayed

who marched to death between the daisies and the camomile

with beldames servants and mountain stars

with swords that slashed through throats and palm trees

The forgotten woman stretches out her white hand

takes however a piece of colored glass and sings

"I call to you not form within the dream

but from among these splinters of multi-colored glasses

yet you always recede

no matter how much I try to match these broken glasses

I can no longer face you wholly

at times I only construct your head

among a thousand other savage heads that estrange me

at times only your beloved body

among a thousand other amputated bodies

at times only again only your blessed hand

among a thousand other outflung hands

that encumber my feet under my dresses

they blindfold me with their black handkerchiefs

they command me to walk and not turn back my head

to see your eyes shattering"

The forgotten woman in the depths of her victorious sleep

it is only a breeze the roar of a cannon

it is the calmor of the heart the smoke of minefields

it is hatred bodies that couple in rage and sink

it is a dreadful kiss on the forntiers of sensuality

where five deaths may be found sown among the poppies

it is the shadow of her lover passing by

Forty years later the forgotten woman shall uproot these words. And shall I say that on this street miracles happen? No. Miracles happen only in haunted churches. Shall I speak of the man who became a tree and of his mouth that sprouted with flowers? I am shy but I must speak no matter if no one believes me. The only one who could have believed me was killed there before the altar, a few naked boys stoned him to death. They wanted to kill a wolf-hound they wanted to sing a song they wanted to kiss a woman. At all events they killed him and cut him in two with a saber. From the waist up they put him in a window as a statue. From the waist down they taught him to walk like a toddling child. He did not seem worthy enough to become a good statue for his eye would not turn white. And then again his feet cut a great many crazy capers and frightened the women who spend the night in windows. Now from the sides of his lips two small bitter leaves have sprouted. Extremely green. Is he a flower or a man? Is he a man or a statue? Is he a statue or a lurking death? Forty years later the forgotten woman shall uproot these words.

The forgotten woman is the soldier who was crucified

the forgotten woman is the clock that stopped

the forgotten woman is the branch that caught fire

the forgotten woman is the needle that broke

the forgotten woman is the tomb of Christ that blossomed

the forgotten woman is the hand that aimed

the forgotten woman is the back that shuddered

the forgotten woman is the kiss that sickened

the forgotten woman is the knife that missed

the forgotten woman is the mud that dried

the forgotten woman is the fever that fell

of night and fire

with large suns made of roses

the ship anchored by the pierside

and further down the storm

and furthr down the drowned man

The tied horses by the rain's side

and further beyond thirst

Kept his gardens hidden in his mouth

that burned and filled the land with smoke

hands of mine filled with mud

Well should I also sing of the rain

when Pontius Pilate walked in the streets

no one recognized his face

in the darkness in the desert next to the cables

when Jesus was multiplying the fishes

one man leant on a hedge

another in a blind bridge

another on a ruined house

when Jesus was multiplying the fishes

and the sea was casting up on land

Pontius Pilate walked in the streets

no one however recognized his joy

with the cage his hungry birds

the garden his lost flowers

the two embraced on the hill

the two sighed in the arcade

the two swooned under the cypress tree

when the sea once more gathered

and put them to sleep in her bitter arms

Black is the sun

with a tall green

would bewitch the birds

wait for my parents

I walk in agitation

I hear things around me howling

they speak, they laugh

about my dead loves

they will gouge out your eyes!

"The Difficult Stunday," "Beauty," "The Dream," "The Forgotten Woman," "The Factory, "The Sheep," "THe Clock" and "Ectoplasms"

Posted by Douglas Messerli at 2:29 AM