Milo De Angelis was born in Milan on June 6, 1951. He spent his childhood in Monferrato, a village in the Piedmont. The childhood experiences of this rural setting, the agrarian practices, the proximity of nature, the provincial legends, would later prove formative to his poetry, reinforcing a central thematic preoccupation with the natural cycle as well as contributing a number of autobiographical allusions.

During his late teens, De Angelis became deeply involved in sports, initially soccer, later track and field. These experiences would also reemerge in his poetry as a pattern of athletic images that resonate with his philosophical speculations. 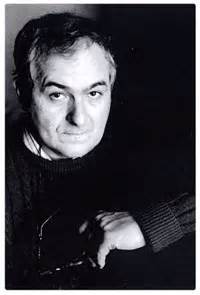 De Angelis began writing poetry at an early age, in his mid-teens, when he was also beginning his readings in literature, philosophy, and literary criticism. His precocious debut occurred in 1975, when some of his poems appeared in two anthologies important in the history of contemporary Italian poetry: the prestigious annual L'almanacco dello Specchio (The Almanack of the Mirror), which usually prints a few interesting newcomers along with recent work by respected major writers; and Il pubblico della poesia (The Audience of Poetry), a selection of twenty-five poets designed to characterize the social and cultural situation of Italian poetry in the 1970s.

In 1976, De Angelis published his first collection of poems, Somiglianze (Resemblances) with the smaller press Guanda, noted for its list of experimental writing. These first publications signaled his emergence as a key figure in post-World War II Italian poetry, one who was developing in new ways the experimentalism initiated by such groups as the Novissimi and Gruppo 63 in the 1950s and 1960s.

De Angelis's poetry shows a commitment to the formal innovation championed by this experimentalist movement, but in the service of speculation on the nature of language and human subjectivity influenced by figures such as Nietzsche, Heidegger, Bataille, Blanchot, Lacan and Deluze. The result, in the words of the poet and critic Maurizio Cucchi, is that "idea and freedom of image often coexist in his verses, revealing a subtending, insinuating uneasiness, an always arduous and troubling skewing of experience."

De Angelis's poetic research let him in the late 1970s to found the journal Il niebo (1976-80), which published translations of several philosophical and speculative texts. De Angelis's own essays, collected in 1982 as Poesia e destina, addressed a wide range of texts, European and Eastern, classical and modern.

Throughout the 1980s, he lived in Milan, tutoring private students in Greek and Latin literature while writing the poems that brilliantly confirmed his early promise. His second collection, Millimetri (Millimeters) appeared in 1983 from the noted publishing house Einaudi; his third, Terro del viso (Land of the Face) in 1985, and his fourth Distante un padre (A Distant Father) in 1989, both from Mondadori. In 1998 Mondadori also published his Biografia sommaria (Concise Biography). The Rome publisher, Donzelli, published a selection of his work, Dove eravamo già stati. Poesie 1970-2001 (Where We Had Already Been) in 2001. His most recent collection, Tema dell'addio (Farewell Theme) won several prizes, including the Viareggio Prize, the San Pellegrino Prize, and the Cattafi Prize.

He and his wife, the poet Giovanna Sicari, currently live in Rome.

close by, will not reach the cheek, gossip

that holds no truth: better

the Nazi gesture that crushes his mind, mine.

it will comprehend everything

with the struggle in the room, the imploring

it helps. The day escaped into the day after

in a few awkward tears

it is put before you: you are contemporary.

of ambulances and rain, in the excitement

and hands on the groin, summoned by the body

the slightest numbness to things

while outside, among the traffic lights, Europe

having invented the finite

far from the beast, defends

along the highways, in linear time

and the eyes don't shut before things, steady

where today a millennium hesitated

between yielding and not yielding

losing itself always later, with intelligence.

The Dream of the Dancing Cat

For the lady of sea and grain

as if she never existed,

of light or in the threatening hiss

of the reeds, spoke

without need of guarantees,

swift shadow on the horse

heading south, beyond the forest, tonight

Born on the earth

Born on the earth

we were that breathless rejoicing

as soon as the minds arrived

on a canary's back

is screwed to our flank, guardian

of the tablets, a harpoon

in the Mediterranean world, among the eggs.

the plunder and so

you have me forever

because there was nothing else

but the mere victory. Later

we shall throw our prey

to the cats: they will know

how to annihilate it!

Here is the quartz page

in the agenda, when

every man is razed to the ground

and remembers. The pine cones fill

faithful to its meters: the very tree

that is perennial for anyone who notices it

and yet is air, only air. It has a severity

and a still attentive custodian. These

The prisoners, you said, found

an opening in the cell. Several

died frostbitten, in the night.

Others, however, by burning their clothes,

saved themselves. But why was the guard

silent? Is it true he shot only at the dead?

The bandage was riddle with holes

but it didn't fall from his eyes. The blinds

and no one can forgive them

not even now, among the other windows,

it's dark. It was

as if he heard

a sister devoured, before him, lead

The clock was stolen, at once, and then

filth on top of filth, cats

A nerve pivots and that space

seeks a scratch in the glue,

the earth you send spinning?"

I shall carry you on my shoulders,

suicides are more secretive than angels

and from the darkless side

the stitched nape will begin

I shall carry you on my shoulders, in tatters, to

"The body was frost-bitten,

"Now," "Metaphors," "The Dream of the Dancing Cat," "Born on the earth," "Conversation with Father," and "Finite Intuition"