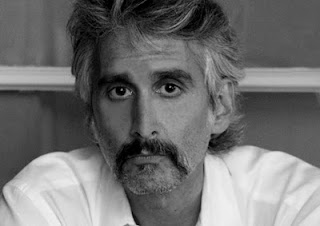 Born in New York City in 1956, Mark Salerno graduated from Columbia University, and received his M.F.A. at Otis College of Art & Design.

Beginning in the 1990s, he published his poetry in numerous small journals, including Exquisite Corpse, Fell Swoop, Jejune, Ribot, Shank Possum, and sub-TERRAIN. From 1993 to 1999 he edited the noted literary and art magazine Arshile, during which time he also published his first collection of his own work, Hate (1995).
For Revery followed in 2000, and over the next four years he published two further collections, Method (2002) and So One Could Have (2004). He currently lives in the Hollywood section of Los Angeles.

Barren for broken so might as well
sky up in the not too distant thighs
O grievous angle these pieces seem
where a juncture of two like souls
might color in the planets and airy stars
I it’s a buddy movie the central character
I want my cowboys to sound like I think
cowboys should sound like in my methods
I loved the repeat the insistent and
anything technical shaping in my clutch
a falling apart heart animadversions
at the boat show in fact a boat load
here a more foreign sounding name
dirty dirty stage direction he sleeps.

Scour the dross say
what seems real alive
you’re alone O broken
hearted melody O fly
in the paradoxical ointment
a person is unevenly
loved and yet these
glinting and burnished
surfaces seem always to
tilt and throw back the
light without purpose
I admire that saving up
that scrupulously main-
tained day followed by
a next and a next
something else is then said.

Of the thousand injuries I had borne
I was charging but that light
gave me permission to be powdery
in the dim or messy to review then
a congenial mode of thought for me
was rowdy in my clutch whereas
my enemies for there are present
of smug contempt merely depictive
I’m gonna flush ‘em out citizens
definition of the end of company
and merely human care so long I’d
wanted say a simple or a hand holding
whatever and if two people give up
while overhead the planets and
innumerable tiny stars.

A congenial mode of thought for
me is drumming there is not plot
in painting so that time not draw
the color from how much more if
wrong loose if wavering modern
my heart a hoax of mere obsession
I love I miss blah blah blah
The central character in the film
For an art that would me more
Of reverie surface or glowy beveled
The joy was hard to say words and
Delusions to be thought of as desire
The way her hands say or the simple
Small-town in a world gone wrong.

Greensward yellow linen anything
Flutter of her hands gesturing and
Another day beyond what I can take
Is this the power of wanting or is
This the flimsy flimflam of memory
Everything comes back except the
Flint in her the gaudy casting about
For vocabulary noises like light on
The Fox lot years ago conditioned
No doubt by the arrangements is love
Mocked to be put to this use still
Ever the still image of her standing
There while all around a chaos of
Furious sunlight shattered spangles.

In my book of accusations and the record
Of my experience the sheriff must choose
Between he movie and what’s happening
O every-fixed mark O befuddled longing
To conjure up the negative of what I am
The artist begins by speaking to others
As described on page after page of whatever
It was rich idylls the rainment of my heart
The way she held her hands in the picture
The passing moments I’d given my life to
For wasn’t I my Lucky Pierre style a dawdle
To amuse this pretty pie this young cutie girl
There is a dream I have where I sail away
Or set aside rewrite and abjure all else.

Sky high into the mile high or sky up
she said nice little town you got here
sheriff with eyes on the stranger logic
wanted the big hit the big grab and skip
over the border it’s a helluva country
to be modern in cottonwoods and damp cuffs
a building falls down by the sky stays put
pinned to its place with apologies to
those who mourn for chicken in a chicken
restaurant I missed you at lights out
O list of words you seem real to me
wading a little in this warm bath of light
the sheriff remains isolated but sticks
and things fall from the flawless sky.