Mark Kanak has spent the past twenty years splitting time between Berlin, Leipzig, and Chicago. He studied German languages and literature at Southern Illinois University and the University of Illinois at Chicago and has devoted much of his literary time recently to translating previously unknown or overlooked authors, most recently Vienna-based writer and radio artist Peter Pessl, the late Rolf-Dieter Brinkmann, and the expressionist writer/dramatist Reinhard Goering, for example. 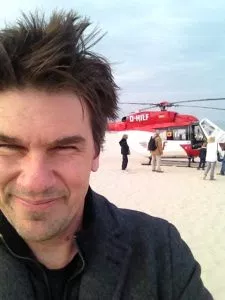 The past few years have been dedicated to developing a working relationship with German language authors and an active attempt to promote German authors by publishing translations in journals such as Circumference, Poetry Salzburg Review, Prague Literary Review, and Blatt!. This has also yielded a new and exciting relationship with Lautsprecher Verlag (Stuttgart) which has led to the publication of both Kanak’s own work (in German) and translations of US poet/musicians such as Jeff Tweedy and Thurston Moore. He also translated the works of the Dada poet Walter Serner, Last Loosening.

Kanak notes, “If anything, my work is an attempt to achieve on paper what groups such as Einstürzende Neubauten and Current 93 have achieved in audio recordings—but I tend to operate in relative isolation [and like it that way]. I routinely work with a great deal of technical material on a daily basis—especially technical translations—and tend to draw more inspiration from the sounds of pneumatic drills than singing birds in my writing…” Recent work has included a collaborative trilingual novel with Raymond Federman and ongoing audio experiments.

He is the poetry editor for the London-based Stimulus Respond Journal.

the collar with an ‘o-fer’

[ represents an indent in the original

Posted by Douglas Messerli at 3:19 AM