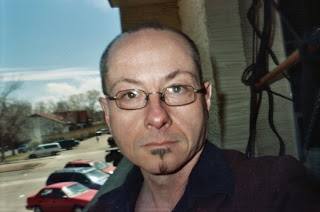 Mark DuCharme was born in Detroit in 1960 and grew up in its suburbs, the only child of a divorced mother who worked as a secretary. He earned a BA from the University of Michigan and, later, an MFA from the Jack Kerouac School of Disembodied Poetics at Naropa University.

He self-published a rather large chapbook in 1990 with which he later became dissatisfied. Numerous chapbooks have followed, as well as three books: Cosmopolitan Tremble (2002), Infinity Subsections (2004) and The Sensory Cabinet (2007). All of these contain “serial poetry” as well as “individual” poems. Beginning with The Found Titles Project (published in 2009 but written earlier in that decade) he abandoned serial poetry in favor of what he calls writing projects. The bulk of his work from this point on has been in the context of various writing projects. Since 2008, he has been at work on a project called The Unfinished.

In addition to poetry, DuCharme has published numerous poetics essays. In 2006 he won the Neodata Endowment Grant in Literature, and he has also been selected for the Gertrude Stein Award in Innovative American Poetry from Sun & Moon Press. DuCharme was a coordinator of the Left Hand Reading Series, the archives of which can be found on the University of Pennsylvania’s PennSound website. He now curates the Stratford Park Reading Series in Boulder, Colorado, where he lives.

Because I can, or whisper
Into the opening which could resubmerge
You in darker nights than we’d conceal
Encasing what was strange

Even turbulent, for a moment, because
I could find you, not there, but real, before
Drawing breath in order to linger
There because I could find you yet

We still could be submerged in
It, it does not matter where
It was, no more, turnabout to image
Image which is constant change

Because I could not stop, but dared
To inform the speaker of the matter
Matter which encompasses us
Do I find you here, up to the wicker

Steeped in lucent trafficking
For death, death to remain active in
A texture, an accidental barrier
& I cannot stop until then