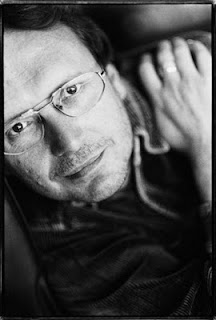 Born in Kortrijk, Belgium on August 9, 1953, Luuk Gruwez attended high school at the Damiaancollege and graduated in German philology at the Katholieke Universiteit in Leuven. In 1976 he moved from his nave Kortrijk to Hasselt, where he lived as a teacher before being granted a writer's scholarship.
His debut collection, Stofzuigergedichten (Vacuum Cleaner Poetry) was published in 1973, a book with special emphasis on the orality of his writing. Indeed, Gruwez is sometimes described more as a singer than as an artist. His poetry, represented in several volumes, is a plea for sensuality, daring to be different and calling for emotional courage and lyricism.
Along with poets such as Miriam Van hee, he is often considered one of the major representatives of New Romanticism, a literary trend that injected new life into Flemish poetry in the late 1970s.
Among is several books are Ach, wat zacht geliefkoos om een mild verdriet (Oh, Such a Soft Caress because of a Mild Sadness, 1977), De feestelijke verliezer (The Festive Loser, 1985), Dikke mensen (Fat People, 1990), Vuile manieren (Filty Manners, 1995), Bandeloze gedichten (1996), Allemansgek (Everyman's fool, 2004), and Lagerwal (Lee shore, 2008). In 1995 he won the Hugues C. Pernath Prize for Vuile manieren and in 2009 Gruwez won the Herman de Connick Prize for his poem "Moeders".
Gruwez also writes stories and, with fellow-author Eriek Verpale, has compiled collections of letters.
Of his poetry, the poet himself has observed: "When I started out as a poet, I was a dandy, often writing about myself. It was a narcissistic me, typical of every self-respecting poet. Slowly, that me developed into a more universal we."


THE LAST WORD
She makes herself pretty for her death, my love.
No shirt, no skirt costs too much for her.
She buys herself earrings and sultry perfume,
but is still thrifty with water and gas.

So much that she still hasn’t learned to forget:
how good you need to smell when you die
and that with a bad last impression
you can ruin your whole life.

So much that I still want to say:
that she still needs to eat up before she goes.
Give me, not her, the last word.
I only ask: get well, get well.

—Translated from the Dutch by Kendall Dunkelberg
(reprinted from Vuile manieren, 1994)

And if there is no longer any tenderness,
let us then pretend this tenderness
with blindfold hands and eyes half closed,
lying against each other like a frontier.

A word may then no longer be called a word,
but a mouthful of comforting silence;
and longing no longer the length of an arm,
but further, and more distant than a panoramic view

full of summer birds, music by Mendelssohn, a sfumato
derived from Da Vinci. You will swap your most beautiful pity
for my favorite sorrow; I, carefully taking time
to explore more deeply the fading of your body.

O, if there is then still tenderness,
this tenderness should be dreaded
like a very old wound. So much tenderness
no man could ever stand.
—Translated from the Dutch by Greta Kilburn
(from Bandeloze gedichten, 1996)

TOGETHER
You died simply to kill the time.
Dying suited you, in fact so well
that, turned to a thing with other lifeless things,
you scarcely seemed deceased.

And when it got that far and you so far away,
a gentleman came by with strings of prayers
who, intoxicated by his offered blessing,
wanted to bore you with eternal life.

But nothing could harm you that
silent rapture, in which you lay and dreamed,
paid court to and fingered
by smoothly handsome, idiotic death.

And together at last and never so together,
the lightest fairy, who once bore me.
The first gentleman first loved
the last lady.

She nods above the bowl
and dozes. It's her way of ageing slower.
So she lays all her wrinkles almost coyly
to rest on a formica top.

A sweetie that calls her Miss:
the heavenly drudge of stench
that longs for money and sentiment,
warming herself on a coffee pot.
Never beautiful, but unearthly.
Spotless dragon.
- Only the flushing gives rapturous applause.

Fat people know everything about love,
up to the remotest corners of their body,
the catacombs of their own flesh.

Their belly is the foreign country where they live,
continuously yearning for the slimmest waists
that make their mouths water like pastry.

Nobody is more sincerely sad,
so cheerfully mournful in those distant guts,
those far toes and bulbous buttocks.

As if they just consist of remnants:
less than a hundred kilos nothing
that nobody will ever want.

—Translated from the Dutch by Ria Leigh-Loohuizen
(from Bandeloze gedichten, 1996)

HELL UNDER A SKIRT

Barely she still calls me mister,
the shrew that’s training me.
Disguised as the dog of the house,
I must sniff at her existence
and bark when something is suspicious.

For she has the corrupted mind
of one who has been lonely a long time.
I follow the rolled hem of her skirt,
must come along to butcher and to baker,
in the evening do my tricks to get a bone,
in the morning on her counterpane I wake.

The things of which I am ashamed
are not the things that I have done,
but that I only craved:
I do want to bite into her calves,
But my teeth are no longer sharp.

—Translated from the Dutch by Ria Leigh-Loohuizen
(from Bandeloze gedichten, 1996)

In men it’s cold and frequently December.
In women it is mostly May.
They want to shimmer all their lives,
disguise themselves from head to toe,
so they don’t prematurely fade away.
Everlastingly they strive to last.

In men it’s cold and then stops dead.
My God, how keen they are on ending things.
Men rattle to a climax fast,
are fully armed in their own selves:
their time on earth in growing stiff is passed.

Women’s gender is a suppler kind,
in which things blossom, things unbosom,
where they keep a store of tenderness,
homesickness for a lake in Switzerland.
They’re fond of starting and conserving.

In men there’s only war and nothing else.
In women birth continues until death.
They bat their eyelids for a while,
they sparkle, briefly toss and turn
and there you have a brave new generation.
One man’s enough for its extermination.

In men it’s cold and frequently December,
in women it is always May.

Sometimes I lie upon her bed,
with breasts stripped bare, an idiotic stare.
She has no clue how fully she is mine
once she has gone to someone else.
I fill her sweaters up with her
and in her panties and her bras
I sniff her most accomplished lovers:

we crowd together in her underwear.
Outside, snapdragons and lobelias,
but every hour that I wait for her
I leave the shutters closed. I bleed. I burn,
act midnight all day long.
I smoke her king-size cigarettes,
apply her lipstick to my lips

or smile her brilliant toothpaste smile.
Today’s a stifling day in June.
I want her to catch me in the act,
want her sugar breath to brush my buttocks,
want her stilettos deep inside.
And want her to hit me at long last.
I’ll feel all her girlfriends as she strikes.

—Translated from the Dutch by Paul Vincent
(reprinted from Allemansgek, 2004)