Lisa Robertson was born in Toronto, Canada in 1961, and now lives in France. From 1979 until 2003 she lived in Vancouver, British Columbia, where she studied at Simon Fraser University with Robin Blaser, Roy Miki and George Bowering. From 1989-1995 she ran a small bookshop, Proprioception Books, specializing in contemporary poetry and poetics. During that time she became involved with the Kootenay School of Writing, where she was a collective member from 1991-2000, and Artspeak Galley, an alternative artist-run center, where she is an honorary member of the Board of Directors.

Her second book, Debbie: An Epic, was nominated for the Governor General’s Award for Poetry in 1998, when she also received the Judith E. Wilson fellowship in Poetry at Cambridge University. While at Cambridge she researched early English meteorological texts, and came to write The Weather, which won the Relit Award for Poetry in 2002. In 2005, Rousseau’s Boat won the bpNichol Chapboook Award. 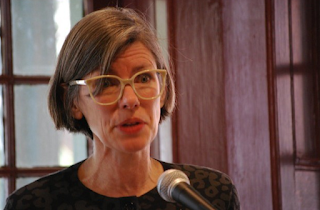 Her books each seek to frame and describe a structural problem. Perhaps that problem is of political and psycho-social import, and pertains to gender, nation, or identity. Perhaps the problem is generic and relates to the formal history of epic, pastoral, or autobiography. Perhaps the problem is lyric and relates to the ear’s shifting place in a language system. In any case, what motivates her poetry is the desire to thoroughly complicate and interweave these problems, rather than to annul them.

Robertson holds no degrees and has no ongoing academic affiliation. She supports herself as a freelance writer, and under various pseudonyms publishes architectural and art criticism, and essays on interior decoration, fashion, and cuisine. For four years, as Swann, she was a regular horoscope columnist for Nest: A Quarterly of Interiors (New York) until its demise in 2005.

It explores different degrees of fear.

Augustine’s own task was equally impossible.

And you are a law of language.

And my mouth took part

And we fed you morphine mixed with honey.

And you are a rare modern painting in the grand salon

And you are a wall of earth.

And you are an ideological calm

And you are flung out to search.

And you are framed only by the perspectival rigors of masonry

And you are not a neutral instrument.

And you are pornographic

And you are the imagination of society as a tree.

And you are the kneeling woman who expresses some alarm

The woman looks somewhat apprehensively at the viewer.

And you are the pronoun of love, scorn, accusation, glamour

Everything you know about the animal pertains to the riot of love.

And you are Torontos of cold trees

Where erupts the morning’s catalogue.

And you did not die outside of love

And you do not judge.

And you roll down scrabbling at its glaze

The man on the right runs away terrified.

And you see how an animal dies

Giving a first drop of voluptuousness.

And you seem to pour rose water

Leaning on trees for rest.

And you speak in leaves

To flirt and fight and appease.

And you turn into a her not knowing what’s happening

The woman in your midst may be kneeling or seated or perhaps has simply been drawn out of scale.

And you are the last wooden house

The carved frame includes the heads of dogs.

And you will not die

But chance is always a little ahead.

And your failure is my tongue

The dramatic effect is heightened by the bright red ground showing through the top layers.

And your heart broke off into this great desire to see

Into the tall grass.

As in the ancient literary genres.

Because it is a known fact

The wounded fall towards the point.

Because of mute desire

You are the teak pavilion.

Because you wanted to be flattered

You are portrayed here as the sea goddess Thetis with two of her five sons.

But chance is always a little ahead

But not under circumstances of its own choosing.

Emptying your apartment during the season of apricots

I tell mine complaint.

I tell mine complaint

I tell mine complaint.

I took part in the savage transaction

It burns to come back to you.

It is pure surface

It pushes straight towards the author of its hurt.

Like you invented summer in a text I discovered in your drawer in the summer of 1998.

Or a woman whose complete being seems to sing sex

One man shows his companion.

Supposing a designation to have an interior.

The fabric is knotted to reveal your figure

The folds suggest the roundness of a young girl.

The tissue is syllables and dreams in a distant colony

The parts of life are not happening in tandem.

Then it is summer

This material is reconciled to chance, which is spacious.

To make livid a philosophy

We helped you leave breath.

Whether love comes as a young boy with girlish limbs

You are behind and between Christ and the adulteress, witnessing.

You are buckled into my truth

A young woman looks openly out of the picture.

You are the claustrophobia of the image

At its peak a couple stare at the lightning-filled sky.

You are the next cabin also.

The figures represent the four ages of man

You call this passivity.

Accompanied by only the city.

You lie there wounded

You see the precision of the distant city through the round arches of the bridge.

You see the women’s thick hair bound with coloured ribbons, their complicated sandals and the sprigs of olive

You slip your cock into the actress’s vagina.

You took part in the savage transaction of negation.

You are wooden houses transformed into apartments and restaurants

Your breath thrummed the wooden house.

Your failures are no longer sacred

The cabin. The music shop. The next cabin.

Posted by Douglas Messerli at 2:30 AM