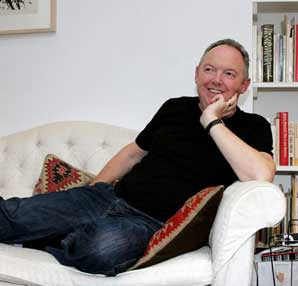 Born in England in 1956, rose to prominence with his first book of poetry, Robin Hood in the Dark Ages, published in 1985. Eight subsequent collections were equally enthusiastically received, and his work has been anthologized in both England and the USA.
Corocoran’s New and Selected Poems was published by Shearsman press in 2004. His recent sequence, Helen Mania, was made the Poetry Book Society choice in 2005.
He lives in Cheltenham, where he is Deputy Head of a large Comprehensive School.

You see I am surrounded by these things
a medium like breathing under water,
the Royal Bokhara, the pictures on the wall
I wave as I float by with transparent hands.
My wife's sexy dress hanging there
taken off like a season transformed,
and the organic food jumps into my mouth
as your warm arm falls across me.
The light from the floor landscapes your sleep
and those would be cabbage roses descending,
like red kisses on your perfect cunt
around the dim margin he is on his knees.
Then the great secret settles on everything,
you're sleeping and I launch out into darkness;
ivy pours into the courtyard, I'm half drowned,
face emerging in Spring - Dionysus.

Even the island I speak from is painted by Hilton,
to the rhythm of dropped seeds into instant oleander
and open mouthed cats into swaying boughs;
the riot of ants know the plan
and blue drips from the mighty swimmer.
Interior darkness dissolves in the air
and perfect weather wraps us bodies;
hand in hand like nerve ending sex
my eyes have seen the glory
riding in on a big clam shell.
Let the breeze stir and sing,
lift the shirt off the girl with ample breasts
and cool the hairy god slumped in the breakers;
the two master is trim, we're ready to leave,
the white circuit snaps and ignites.
The all-sea shines lit from below,
childrens' voices scud across the bay
quick ripples enskied in acrylic;
- will you wait for me there?
on the shore of the morning world.


I think of the fields at night,
the compact Celtic geometry
laid over with darkness
and the black sea rising.
The Gulf of Sleep invades my room,
waves rise with each breath
drowning thought under the door,
go down you beasts, you bastards.
In the compass of the sea
I am abandoned, absolute,
but let me keep the way
of talking to my children.
The lights on the other side
shine out clear and bright,
my boat is one word sent
in the language of my painted hands.
The shape of morning rises,
white ribbons of light
unravel across the sliding waves,
momentary chart of all the sea lanes of the world.

If this window opens on the world of free running senses;
your filthy mind in the cart pulled by my bonny horse
—see she carrapaces, treading the liquified air
falling like amber on us sorry bodies,
so that our limbs are restored, magically proportioned,
and we lie and roll and walk in one another,
the anthropometric secret in our hands at last
as easy as talk floats out of the bedroom door
across the evening laid out in this land of good weather;
the game is up - and if the window doesn't etc the game is up:
we must settle for the living creatures we have about us,
and that would be the Hilton in this earthly paradise
awake in a sea of trees breathing underground,
ambidextrous, prolific and grinning.