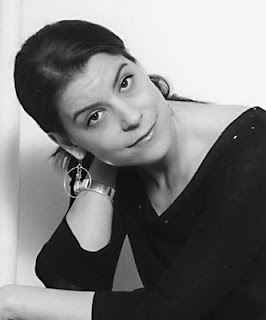 Katy Lederer was born in 1972 in Concord, New Hampshire. Her father taught English at St. Paul's, an Episcopal boarding school on the outskirts of town. After attending St. Paul's, Lederer attended the University of California, Berkeley, where she majored in English and anthropology. While there, she began writing poetry and studied with Robert Hass, Lyn Hejinian, and John Ash.
After a stint in Las Vegas learning poker from her professional poker playing siblings, Lederer attended the Iowa Writers' Workshop as an Iowa Arts Fellow, where she was awarded an Academy of American Poets Prize. In her first year at Iowa, Lederer started publishing Explosive Magazine, featuring emerging poets and hand-printed covers designed by the poet and artist David Larsen. She also published the chapbooks Faith (Idiom Press, 1998) and Music, No Staves (Poets & Poets Press, 1998).
After completing her degree, Lederer moved to New York, where she worked briefly for an Upper East Side psychoanalyst and as an administrative coordinator of the Barnard New Women Poets Program before joining the quantitative trading firm, the D. E. Shaw group, where she currently works.
In 2002, she published her first full-length collection, Winter Sex (Verse Press), and in 2003 she published Poker Face (Crown), a full-length family memoir detailing her family's obsession with gambling.
Lederer has been awarded three fellowships from the Corporation of Yaddo and a 2005-2006 fellowship from the New York Foundation for the Arts. "The Apperceptive Mass" is from The Heaven-Sent Leaf, her second full-length collection, was published in 2008.

Systemic and assembled with great calm.
On the face of one
Who goes into the silent place—

Who goes into the silent place,
Before the inner temple,
and aspires.

Who goes,
That presence,
In the den,
An even-tempered lens through which the transmittal of all that is
Beautiful goes.

We are hushed in our external sense
Our inner hearts are
Rockets.