Born on August 26, 1937, John Perreault grew up in New York City. Although he wrote poetry early on, publishing his first book in 1966, he was perhaps better known as an art critic and artist. From 1966 to 1974, he was the art critic for The Village Voice, and from 1975 to 1983 he held the position of Senior Art Critic and Art Editor at The Soho News. His art writings have appeared in numerous journals, including Art in America and Art Forum.
From 1978 to 1981 he was the President of the American Section of The International Association of Art Critics, and recently won The Penny Mc Call Foundation Award for Art Criticism. 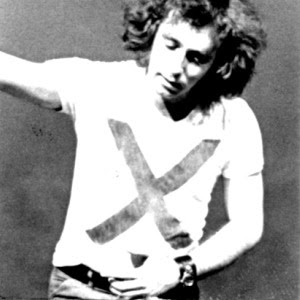 John Perreault performing in Alphabetical Tshirts in 1969
His first book of poetry was Camouflage of 1966, and he became involved with the St. Mark’s Poetry Center the following year, performing a long poem, “Hunger,” while projecting color slides on his naked back. In 1969 Hannah Weiner, Eduardo Cost and Perreault collaborated on all-media performance featuring clothing made by artists.
His second book of poetry, Luck, was published in 1969, and individual poems were published in numerous important literary magazines of the day, including “C,” Mother, Locus Solus, Art & Literature, Chelsea Review, The Paris Review, Nomad, Angel Hair, The World, and 0 to 9.
During the late 1970s and through the next decade and a half, Perreault turned away from poetry to write fiction, collected in Hotel Death and Other Tales by Sun & Moon Press in 1987.
He has also written and edited many books on art, including Philip Pearlstein: Drawing and Watercolors, Usable Art, and On the Work of Sylvia Sleigh.

I can be you. Or if not you,
At the bottom of the garden is
then at least your twin, to give
a hard-on and not a fountain.

the expectations a difficult ride.
That fountain, like tumescence,
But why? I'd rather be a shadow,
is also a sham and a sock and not

then a reflection in some other
a thimble like the flower or
world of reversals, when and if
the crown that is upside down,

the shadow world would sink.
your headdress of old fathers.