John Kinsella was born in Western Australia in 1963. He is the author of a dozen works of poetry including Full Fathom Five, Syzygy, The Silo, Erratum/Frame(d), The Radnoti Poems, The Undertow: New & Selected Poems, and Lightning Tree. 1997 saw the publication of his experimental novel Genre (international release), and the publication of the English edition of his inter-nationally successful The Silo: A Pastoral Symphony by Arc. 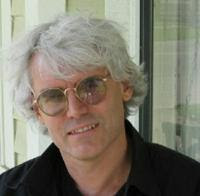 In 2009 he edited the Penguin Anthology of Australian Poetry.

He was a writer in residence at Churchill College, Cambridge, in 1997. Kinsella was appointed the Richard L Thomas Professor of Creative Writing at Kenyon College in the United States for 2001, where he is now Professor of English. He is also Adjunct Professor to Edith Cowan University, Western Australia, where he is a Principal of the Landscape and Language Centre He will also be involved in the teaching of Australian literature in the Commonwealth Literature course run by the English Department of Cambridge University.

He is the editor of Salt magazine and Folio (Salt) publishing. He is the recipient of numerous awards, grants, and Fellowships, including: The Western Australian Premier's Award for Poetry, The Harri Jones Memorial Prize for Poetry, The John Bray Poetry Award from the Adelaide Festival, Senior Fellowships from the Literature Board of The Australia Council, and a Young Australian Creative Fellowship. His work has been or is being translated into many languages, including French, German, Chinese, and Dutch.

He was commissioned to create a textual adaptation of Wagner's Götterdämmerung for the 2003 Perth Festival. He is the author of four verse plays (collected as Divinations).

that crops up in conversation or letters

or in surveys of vocation;

pushing its way round, as if the tunnels before

its limp walls are hollow, expectant.

we’ll plug into from wherever; steel-capped boots

come from varies with technology;

who apportions part of their attention span,

cries just because the music is in a minor key.

and the site pale as further away.

of muscles and component parts urging

a gushing out, a bleeding heart. This is every

one of you built up to a head, to my lungs

so tight I barely breathe, my hands and feet

the chrysalis of an unopened pink sunray,

or fields in which poisons weren’t understood,

and extractions, the draining rock

above cave systems that even now harbour

species of animals unknown to anybody—anybody

at all. Out here, sight shuts down;

Posted by Douglas Messerli at 1:35 AM