John Ashbery was born in Rochester, New York on July 28, 1927. He was raised mostly on a farm near Lake Ontario. He graduated from Deerfield Academy before going on to a university education at Harvard—where he wrote on Wallace Stevens under the supervision of F. O. Mathiessen—and at Columbia University where he received in M.A. degree.

Early in his education, Ashbery read poets such as W. H. Auden, Dylan Thomas, and Wallace Stevens, but his first ambition was to become a painter, and from the ages of 11 to 15 he took weekly classes at the art museum in Rochester. His first poems appeared in Poetry, which were submitted by a classmate while he was still in high school. In the mid-1950s, he moved to France, just before the publication of his second volume of poetry. There he worked as an art critic and edited the famed international review Art and Literature. 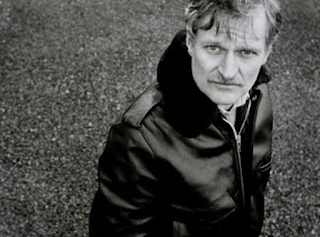 It was in the late 1950s that critic John Bernard Myers categorized his writing as sharing traits with other rising poets such as Kenneth Koch, Frank O’Hara, James Schuyler, Barbara Guest, and Kenward Elmslie, all of whom would later to characterized as the first generation of a “New York School.”                  Ashbery also wrote a novel, A Nest of Ninnies, with fellow poet James Schuyler, and wrote several plays early in his career. His Three Plays were published in 1978. He also translated several works of poetry and prose from French into English, particularly the works of Rimbaud and Pierre Martory. His Selected Prose appeared in 2005.

Ashbery won nearly every major American award for poetry, beginning with the Yale Younger Poets Prize in 1956 (selected by W. H. Auden) for his first book of poetry, Some Trees. He was awarded the Pulitzer Prize (for Self-Portrait in a Convex Mirror), the National Book Award (for the same title), the Lenore Marshall Poetry Prize, and the Bollingen Prize (both for A Wave). Among his many other awards and recognitions were a MacArthur Fellows Program Fellowship in 1985, the Golden Plate Award of the American Academy of Achievement (1987), the National Humanities Medal (2011), and the National Book Foundation Medal for Distinguished Contribution to American Letters (2011).

From the highly experimental The Tennis-Court Oath to more romantically-inspired meditative works such as Self-Portrait in a Convex Mirror, Ashbery remained a major force in contemporary American poetry.

For a large selection of Ashbery's readings of his own poems and interviews, click below:

He had emerged from the woods. Two poachers fired their rifles above his head. He couldn't restrain his joy.

He danced with the cypress, and stopped.

Cancel the order. The choir of aging starlets that blundered halfway through here tonight shrugged, appalled probably. Wasn't it time to go? Wearily they turned back down the cobalt and terra cotta ramp, singing a song to hoist their spirits, the "marche militaire." Now eyeballs close on the distant porousness. It's not liquor that gets us there.

And the heavens, it was all duty after that. Duty calls. Which isn't to say pleasure doesn't too, and louder. My head is so screwed up I can't find your name in the yearbook. Years ago, it was like mist.

The cat is trained to touch base, scout out new locations. We'll all be back in a year's time, to the day. We'll see how it looks then. Meantime grades and awards are to be given out. Sheepskin hung on the walls in brocaded taverns. It was all over for them. But like them, a kiss comes to light our way in the eccentric competition.

Remember that I loved you. See no more.

I have been rereading John Ashbery’s nineteenth book of poems in the Santa Monica Courthouse, where I am on jury duty. The waiting is interminable (I was first assigned to the Zubin Metha vs. Susan McDougal jury pool!) and not enhanced by the now ubiquitous proximity of other people’s cell phones. “Face it, Myrna!” says the scruffy old gent to my right, “You’re into total denial.”

What a great setting in which to read Wakefulness! For despite the charges of difficulty, incomprehensibility, and non-sense, Ashbery is, as Douglas Crase argued some fifteen years ago in his contribution to David Lehman’s Beyond Amazement, eminently our realist poet. When he begins “Cousin Sarah’s Knitting,” with the lines:

You keep asking me that four times.

Why trust me I think.

There is, in fact nobody here

He is recording, with only the slightest heightening, the way people (in this case his own relatives) actually do talk. And when, in “Laughing Gravy,” the poet declares, “The crisis has just passed. Uh oh, here it comes again, / looking off to blame itself on,” he is pinpointing, with droll humor, precisely the way information is disseminated. Indeed, one can hear the White House officials declaring that the crisis has just passed, and then – Uh oh!

But despite these great comic moments, Wakefulness is a somber book. At seventy, Ashbery is more overtly haunted by the past than was the poet of Self-Portrait in a Convex Mirror and Houseboat Days. “Everything,” we read in the title poem, “was as though it had happened long ago / in ancient-peach-colored funny papers,” and again, “History goes on and on, / rolling distractedly on these shores.” The past and the future–or the fear that soon there won’t be one. “Each day, dawn condenses like a very large star.” And night thoughts become pervasive.

of fear perched on my dashboard once, but we had all been instructed

to ignore the conditions of the chase. Here it

seems to grow lighter with each passing century. No matter how you

life stays frozen in the headlights.

Funny, none of us heard the roar.

We now have many Ashberyian poets, but none that can rival the master at this sort of effect. The note of anxiety in lines 1-2 is common enough, but who else could personify fear as a “kindly gnome...perched on my dashboard”–a very just metaphor because it actually is when one is driving along somewhat aimlessly that such thoughts intrude. The “chase,” whose “conditions” we have “been instructed / to ignore” can refer to its diminishing weight, but it can also refer to the increasing sense of constantly living under floodlights from which there is no escape. The poet’s anxiety, in any case, is characteristically deflated by the cliché “No matter how you twist it.” But at that very moment, his car seems to hit something. A deer crossing the road? A human being? A shadow of oneself? The “light” of line 4–the light of common day–becomes the specific headlight in which “life stays frozen.” It is thus we meet death, never heeding the warning signs: “Funny, none of us heard the roar.”

Such intimations of mortality are chilling but never self-pitying. As the poet puts it in “Added Poignancy,” “What could I tell you? I couldn’t tell you any other way. / We, meanwhile, have witnessed changes, and now change / floods in from every angle.” Then immediately the deflationary impulse kicks in: “Stop me if you’ve heard this one.” Like many of the poems in Wakefulness, “Added Poignancy” has an intimacy of address that is new to Ashbery. The second-person mode, latent in poems as early as “They Dream Only of America,” now becomes pervasive: “Stop me if you’ve heard this one, / but if you haven’t, just go about your business.” Here, as usual in Ashbery, the final clause makes a U-turn: the expected conclusion would be, “but if you haven’t, then listen!” or “But if you haven’t, stay a moment.”

Such non-sequiturs are by now an Ashbery trademark, but the poet is endlessly inventive (or is it by now second nature?) at producing deflationary gestures as when, in “The Burden of the Park” (the title is just two letters away from the familiar “The Burden of the Past”) the “park” is defined as “all over,” and becomes the scene for a series of fragmentary narratives of childhood, part memory, part dream, my favorite being the “inner tube on a couch,” which becomes a way “out,” taking the poet and his friends on a trip “down the Great Array river.” One “Each of the inner tubes,” we now learn, “was of a ‘different color’: Mine was lime green, yours was pistachio.” But–wait a minute–pistachio is lime green: so much for the ability to make meaningful distinctions.

Despite its greater emphasis on history and memory, on death and Last things, on a new, more intimate relationship with “you,” Wakefulness does not mark a notable departure for Ashbery. He is not writing in a new mode or experimenting with new techniques. One might complain, therefore, as my students sometimes do, that Ashbery’s poems have become repetitive, that however effective, say, “The Burden of the Park” may be, Ashbery has already written this kind of poem many times before, creating a sense of replacability.

It’s a case, I suppose, of finding the cup half empty or half full. From the perspective of the total oeuvre, Wakefulness may not be an absolutely essential link in the chain. The mastery its poems exhibit is a mastery that has been witnessed before. On the other hand, taken in itself, Ashbery’s new book is still more accomplished, more pleasurable, more profound than nearly any of its current rivals. A sifting out process will take place later. But for the moment, we can take each new Ashbery volume as it comes, relishing the exquisite sense of timing that produces lines like

You know I adore ceremony,

Even while refusing to stand on it.

Or, as he puts it later in this poem (“Homecoming”):

I need your disapproval.

Posted by Douglas Messerli at 2:13 AM