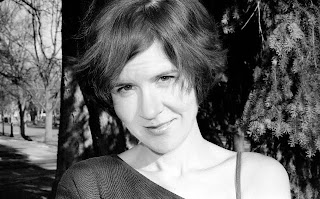 Joanna Klink was born in 1969 in Iowa City, Iowa, where she grew up. She attended Carleton College in Northfield, Minnesota and later earned a Ph.D in Humanities from the Johns Hopkins University and an M.F.A. in Poetry from the University of Iowa.

Her first book, They Are Sleeping, won the Contemporary Poetry Series through the University of Georgia Press and was published in December 2000. Her second book of poems, Circadian, takes as its guiding vision circadian clocks, the internal time clocks of organisms that regulate rhythms of sleeping and waking. Affected by the presence and withdrawal of light, these clocks influence, among other things, the opening and closing of flowers, the speed at which the heart pumps blood, and the migratory patterns of birds.

Klink is also writing a book length lyric meditation titled Strangeness. A hybrid of forms—prose poem, essay, and biography—Strangeness is at once an introduction to the life and poetry of Paul Celan; an extended reflection on Celan's search for a reader; an exploration of the strangeness of poetry in general; and a defense of the obscure or difficult poem in an age in which more straightforward poems tend to be popular.

A recipient of a Rona Jaffe Writer's Award in 2003, Klink teaches in the M.F.A. program at the University of Montana.

Into the Kitchen a Light

Into the kitchen a light
rays down quiet. A private
sense of absence in my everyday
patterns—of disservice, breath,
or words pulled into my ribs
prying apart my errors from
the hopes that made them—
and outside the window coated
in soot from winds that come
all winter, some process has
ceased—although birds
drop and lift off the roof,
aerial sweeps, or just bursts of
feather, wings, claws, and the leap
of heart I would have,
should I be so brightly altered
with the chances of life,
a reparation I feel gathering
in my lungs, zero in the pitch,
scarlet wing, most unnatural
sound held in the dim
threshold of my throat—
or am I less than I was—
and fear I can't distinguish
the delicate blue current inside
the light from the pain in my voice
or the early morning fog laid over
the grass from the voice
that underlies everything