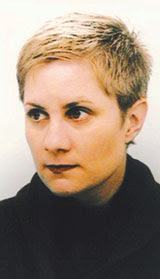 Jennifer Moxley was born in San Diego, California in 1964. At 18 she worked as an au pair in France for a year, after which she returned to California and studied for three years at the University of California, San Diego. In 1989 she moved with scholar and critic Steve Evans to Providence, Rhode Island, where she eventually completely her B.A. at the University of Rhode Island and then went on to earn an M.F.A. from Brown University in 1994. From 1992-1995 she edited The Impercipient, a stapled magazine dedicated to publishing the work of her contemporaries. Following this venture she co-edited, with Steve Evans, The Impercipient Lecture Series, a monthly poetics pamphlet.

She is the author of Often Capital, The Sense Record and Other Poems, Imagination Verses, as well as several chapbooks, including Enlightenment Evidence, which was translated into French as Evidence des Lumières at the Fondation Royaumont in 1998. Her translation of the French poet Jacqueline Risset’s 1976 book The Translation Begins was published by Burning Deck in 1996. In addition to French, her poetry has been translated into Norwegian, Swedish, Farsi, and Czech. Her poem “Behind the Orbits” was chosen by Robert Creeley for inclusion in The Best American Poetry 2002. She has been the poetry editor for The Baffler magazine since 1997 and a contributing editor of The Poker magazine since 2003. Presently she lives in Orono, Maine and teaches at the University of Maine.

True faith does not need the state to enforce it. It makes neither hope, nor a shroud. We will walk out of the visible and accept the darkness. We will find the line. It extends backwards thousands of years and forward even further. The utterance cup, the gentle metric, old words new mind lost time and loves. You sensed it all along, but the knowledge was hopelessly muddled by the inherent drive to author new life. Now cut the spittle line spun into reason and enter the grave alone.

Or write. Find time in words. Replace yourself cell by letter, let being be the alphabetic equation, immortality stay the name.