James Weldon Johnson was born in Jacksonville, Florida in 1871, and grew up in a middle class African American family. As a youth he attended Stanton school, the prestige school for education of Jacksonville blacks. He later attended Atlanta University, graduating in 1894 and returned to Jacksonville to serve as principal at Stanton. In his spare time he studied law, and became the first black to pass the Florida bar examination. From 1895 to 1896 he headed a newspaper The Daily American, addressing issues of racial injustice.

After graduating from the New England Conservatory of Music. Johnson’s brother Rosamund and he collaborated on music lyrics, most notably “Lift Ev’ry Voice and Sing,” a song which came to be known as the “the Negro National Anthem.” Moving to New York they continued their work as lyricists for a number of popular songs, including “Louisiana Lize,” “Nobody’s Lookin’ but de Owl and de Moon,” “Congo Love Song,” and “Under the Bamboo Tree,” the last song of which earned them handsome royalties and was made famous again in the 1940s by Judy Garland and Margaret O’Brien’s performance of it in Meet Me in St. Louis. During this early period Johnson also studied literature for a time at Columbia University with Brander Matthews who encouraged his lyrics and serious poems and read the first portion of his novel Autobiography of an Ex-Colored Man. 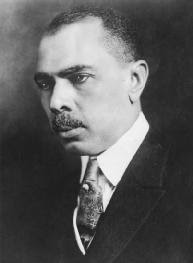 The duo, who worked mostly with composer Bob Cole, broke up in 1906 when Johnson was asked by Theodore Roosevelt, in consultation with Booker T. Washington, to become the U.S. consul to Puerto Cabello, Venezuela. In 1909, Johnson moved to a more significant post in Corinto, Nicaragua, returning to the United States for a brief stay the following year. During this period he married Grace Nail.

In 1912 revolution broke out in Nicaragua, and Johnson’s role in aiding the Marines in defeating the rebels garnered praise in Washington. He left the Consular Service in 1913, when Wilson was elected.

While in Nicaragua he had completed Autobiography of an Ex-Colored Man, which was published in 1912. He continued writing poetry, publishing Fifty Years and Other Poems in 1913. In 1916 he began work with the NAACP (National Association for the Advancement of Colored People), becoming its head in 1920.

But during the 1920s Johnson even better known for his literary output, involving himself with the group of writers and artists connected with the Harlem Renaissance, serving as mentor to younger writers such as Claude McKay and Langston Hughes.

In 1930 he became a professor at Fisk University, completing his autobiography, Along the Way in 1933. He died in an automobile accident in 1938.

Lift every voice and sing, till earth and Heaven ring,

Ring with the harmonies of liberty;

Let our rejoicing rise, high as the listening skies,

Let it resound loud as the rolling sea.

Sing a song full of the faith that the dark past has taught us,

Sing a song full of the hope that the present has brought us;

Facing the rising sun of our new day begun,

Let us march on till victory is won.

Stony the road we trod, bitter the chastening rod,

Felt in the days when hope unborn had died;

Yet with a steady beat, have not our weary feet,

Come to the place for which our fathers sighed?

We have come over a way that with tears has been watered,

We have come, treading our path through the blood of the slaughtered;

Out from the gloomy past, till now we stand at last

Where the white gleam of our bright star is cast.

Thou Who hast brought us thus far on the way;

Thou Who hast by Thy might, led us into the light,

Keep us forever in the path, we pray.

Lest our feet stray from the places, our God, where we met Thee.

Lest our hearts, drunk with the wine of the world, we forget Thee.

Shadowed beneath Thy hand, may we forever stand,

Under the Bamboo Tree*

Down in the jungles lived a maid,

Of royal blood though dusky shade,

A marked impression once she made,

Upon a Zulu from Matabooloo;

And ev'ry morning he would be

Down underneath the bamboo tree,

Awaiting there his love to see

And then to her he'd sing:

And in this simple jungle way,

He wooed the maiden ev'ry day,

By singing what he had to say;

One day he seized her

And gently squeezed her.

And then beneath the bamboo green,

He begged her to become his queen;

And joined him in his song.

This little story strange but true,

Is often told in Mataboo,

Of how this Zulu tried to woo

Although the scene was miles away,

Right here at home I dare to say,

Gush out this soft refrain:

for the early Harry MacDonough and John Bieling version of the song, recorded on

For the version of the song sung by Judy Garland and Margaret O'Brien, click below:

Weep not, weep not,

She is not dead;

She's resting in the bosom of Jesus.

God was looking down from his great, high heaven,

Looking down on all his children,

And his eye fell on Sister Caroline,

Tossing on her bed of pain.

And God's big heart was touched with pity,

With the everlasting pity.

And God sat back on his throne,

And he commanded that tall, bright angel standing at his right hand:

And that tall, bright angel cried in a voice

And the echo sounded down the streets of heaven

Till it reached away back to that shadowy place,

Where Death waits with his pale, white horses.

And Death heard the summons,

And he leaped on his fastest horse,

Pale as a sheet in the moonlight

Up the golden street Death galloped,

And the hoof of his horse struck fire from the gold,

But they didn't make no sound.

Up Death rode to the Great White Throne,

And waited for God's command.

And. God said: Go down, Death go down,

Go down to Savannah, Georgia,

She's borne the burden and heat of the day,

She's labored long in my vineyard,

Go Down Death, and bring her to me.

And Death didn't say a word,

But he loosed the reins on his pale, white horse,

And he clamped the spurs to his bloodless sides,

And out and down he rode,

Past suns and moons and stars;

And foam from his horse was like a comet in the sky;

Leaving the lightning's flash behind;

Straight on down he came.

While we were watching round her bed,

She turned her eyes and looked away,

She saw what we couldn't see;

And she whispered to us: I'm going home.

And she smiled and closed her eyes.

And she lay in his icy arms,

But she didn't feel no chill.

And Death began to ride again --

Up beyond the evening star,

Out beyond the morning star,

Into the glittering light of glory,

On to the Great White Throne.

And there he laid Sister Caroline

On the loving breast of Jesus.

And Jesus he took his own hand and wiped away her tears.

And he smoothed the furrows from her face,

And the angels sang a little song,

And Jesus rocked her in his arms,

And kept a-saying: Take your rest,

Weep not — weep not,

She is not dead;

She's resting in the bosom of Jesus.

And God stepped out on space,

And he looked around and said:

I'll make me a world.

And far as the eye of God could see

Blacker than a hundred midnights

Down in a cypress swamp.

And the light broke,

And the darkness rolled up on one side,

And the light stood shining on the other,

Then God reached out and took the light in His hands,

And God rolled the light around in His hands

Until He made the sun;

And He set that sun a- blazing in the heavens.

And the light that was left from making the sun

God gathered up in a shining ball

And flung against the darkness,

Spangling the night with the moon and stars.

The darkness and the light

He hurled the world; And God said: That's good!

Then God himself stepped down--

And the sun was on His right hand,

And the moon was on His left;

The stars were clustered about His head,

And the earth was under His feet.

And God walked, and where He trod

His footsteps hollowed the valleys out

And bulged the mountains up.

Then He stopped and looked and saw

That the earth was hot and barren.

So God stepped over to the edge of the world

And He spat out the seven seas--

He batted His eyes, and the lightnings flashed--

He clapped His hands, and the thunders rolled--

And the waters above the earth came down,

The cooling waters came down.

Then the green grass sprouted,

And the little red flowers blossomed,

The pine tree pointed his finger to the sky,

And the oak spread out his arms,

The lakes cuddled down in the hollows of the ground,

And the rivers ran down to the sea;

And the rainbow appeared,

And curled itself around His shoulder.

Then God raised His arm and He waved His hand

Over the sea and over the land,

And quicker than God could drop His hand,

And beasts and birds

Swam the rivers and the seas,

Roamed the forests and the woods,

And split the air with their wings.

Then God walked around,

And God looked around

On all that He had made.

He looked on His world

With all its living things

Then God sat down--

On the side of a hill where He could think;

By a deep, wide river He sat down;

With His head in His hands,

Till He thought: I'll make me a man!

Up from the bed of the river

And by the bank of the river

He kneeled Him down;

And there the great God Almighty

Who lit the sun and fixed it in the sky

Who flung the stars to the most far corner of the night,

Who rounded the earth in the middle of His hand,

Kneeled down in the dust

Toiling over a lump of clay

Till He shaped it in His own image;

Then into it He blew the breath of life,

And man became a living soul.

*For a fascinating discussion of this song see Charles Bernstein's essay, "Objectivist Blues: Socring Speech in Ssecond Wave Modernist Poetry and Lyrics," collected in his volume of essays. Attack of the Difficult Poems (Chicago: The University of Chicago Press, 2011), pp. 139-141.

Posted by Douglas Messerli at 2:54 AM