Born in Malmö, in the province of Skåne, Håkan Sandell grew up in the most ethnically diverse city in Scandinavia, and in a region that prides itself on its close ties to continental Europe. He remembers his grandmother telling him when he was very young, “We are not Swedish. We belong to a people related to the Danes and the Germans. We are Skåningar.”

Sandell published his first collection of poetry at the tender age of 19 and went on to became a member of Malmöligan (The Malmö Gang), a group of poets that also included the now very well known film director Lukas Moodysson. In 1995, Sandell and poet friend Clemens Altgård published the long essay/manifest Om Retrogardism (On Retrogardism), in which they argued their case for a broadly based revival of poetry’s traditional resources and techniques, and for the poet’s role as an integral part of society, rather than a spokesperson for a small elite. 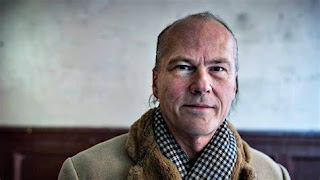 Since leaving Malmö more than a decade and a half ago, Sandell has lived abroad, first in Copenhagen, county Cork, Ireland, most recently in Oslo. He has also traveled much, in the far north of Norway, the Faraoe Islands, Iceland, the Orkney islands, Normandy, Scotland, the Baltic countries and in the valleys of northern Wales. As he puts it—seriously, but with tongue planted firmly in cheek—“I traveled for almost ten years in mist-shrouded countries, and read mostly medieval poetry.” In Norway, Sandell has become an influential member of an artistic community that calls themselves the Oslo-retrogardists and includes many classical-figurative painters, poets, musicians and scholars. In addition to his poetry, Sandell regularly contributes art and poetry criticism as well as essays on historical subjects to the retrogardist journal Aorta, distributed in Sweden and Norway. Working closely together with linguists he has translated poetry into Swedish from Russian, Latvian, French, German, Celtic Irish and classical Greek.

Sandell has developed one of the most distinctive voices in contemporary Swedish poetry, combining a sober but unabashed romanticism with an innovative use of traditional tools such as meter and rhyme, to describe modern urban life. If it is true that his critical pronouncements have occasionally raised hackles—Om Retrogardism was hardly his last foray into polemics—he has not been without his champions. Four of his latest six collections of poetry have been published by Wahlström & Widstrand, one of Sweden’s most prestigious publishing houses, and his work is reviewed positively in the major Swedish newspapers. He has received a number of awards in recent years, including Kallebergerstipendiet from the Swedish Academy, the Essay Prize from the Organization of Swedish Cultural Journals, and a writer´s pension for life from the Writers Union and the government of Sweden.

Twenty two things not to be trusted

Twenty two things not to be trusted:

not night-old ice, not a winter in Skåne

with the ice shining and as yet untrodden

to a confidence inspiring terra firma.

Not winter in Skåne, not spring in Norway

with Easter Lilies rising through the snow’s crust;

never, ever, for Christ’s sake, trust

the blond from the sticks, fresh off the bus,

the bloodied thread in the labyrinth,

or that to every nice girl in a pinch

Mistrust a bit the empire’s balconies,

they have less of a purchase than the piercing

in the snake’s tongue; consider: the ice

in that drink in India will melt, consider, too,

that the red smiles and eyes as violet-blue

as the firmament above the Soviet Union

in one of Mikael Wiehe’s folk rock tunes

won’t always live up to your expectations.

For the young, these valuable recommendations;

never trust the egg laid by the rooster,

or helpfulness encountered at train stations,

and the assurances of a golden future;

that it’s primarily for your own good

that you’ve been taken in hand, that you can depend

upon your being loved by your enemy.

No, don’t believe for a moment in the imperishable

nature of the shining ice; in the spread

wings of Icarus, in a spider’s thread,

in Christian charity with preconditions,

(first published in Words Without Borders)

Poetry rejoices even if the culture dies,

over the girl with her first electric, how her high,

in the green grass of the festival site.

Over the fragile bells of digitalis, how they hide

the pistil and the pollen inside.

Rejoices over rain on the Faroe Islands,

over rendezvous on the Champs-Elysées at evening.

It rejoices over Japan, over Korea,

over arts refined over a thousand years—

the art of swordsmanship, or of drinking tea.

Rejoices over the poet, that his heart still beats.

Your hair of snakes and flowers

When I saw one of those men touch your hair,

I heard for the first time in many a year

the ancient battle trumpets and I saw

the banners of an army winding off to war

and felt that blind power urging me to knock

him out with one punch, send him tumbling to the floor.

If nobody had held me back, stopped me,

I would—God help me—have killed him on the spot,

stomped out his blood, and spit in it. I’m sorry,

but you must be aware your winding hair

is different now, a hornets’ nest, a snakes’ lair!

yes, like a ball of snakes in a flower basket, dear.

Requiem for a Returnee

Czeslaw Milosz has moved to Krakow,

I heard from his Swedish translator yesterday,

to draw in with a deep rattling breath

the concrete dust by the building scaffolds,

breathed out again as the muse speaks her last.

And yet it seems like the scene of his death

should have remained a California

trembling with desert heat and alienation,

a well-aged alienation, where not the Beach Boys

but Chopin, Brahms and Shostakovich

are played at the cultivated funeral.

poets would have sparkled in the backmost benches

hour-glass shaped after a lifetime of salads

elegant too in the most stylish clothing

with small threads of cotton over their shoulders

in that self-satisfied self-preoccupation

I too will adopt any day now

in order to claim my feminine rights.

Paler, now, after the warnings about skin cancer

for over two decades leanly writing

for no one but themselves or no one

but their lovely, gold-framed reflections.

So cool in spite of the heat, and sexy

and they were sexy only for themselves and

for the shelves in the lesbian bookstore.

for fate, music, and watercolor painting.

Muses for sports cars, for the streetlights’

mildness in the dusk, for the blue of the waves

and of the neon letters high as falcons,

bittersweet inspiration with no one to receive it.

why does Czeslaw Milosz travel to Krakow,

only, at the birth of his country, to die

when the long beaches’ mummifying heat

and a sea as blue as a white cat’s eye

made a background suited to a Greek god,

youthful in jeans and drunk on exile

I bind your funeral wreath, I bind in it

hollow-cheeked bluebells and after that nothing,

nothing and all thereafter loose and sparse and bright.

I put in children’s light bouquets,

I call it poor man’s wreath and colorless,

I set in emptiness as well

and dense and heavy palms and dew belong as well.

I fill the wreath with milk and mist

born in the shadows of forests,

too, on the male of the species.

throats curved and slender as serpents’,

sea colors far up in fir-trees,

seek me out now after decades.

Hardly-heard tones to the present,

greatness at last in the memory.

when ecstasy shifts into clarity,

amber-red eyes in the darkness.

Also where you lay broken,

weighing the wind down, the forest

Wings that the waters reflected,

gracing the air and the sunlight.

Meetings with you as anathema,

greenery that sings in one’s vision,

chased along over the sidewalks

scratched with your feet’s curled deformities,

give back an image of purity

trampled down there by the corner.

are quickly worked over by footwear.

even in death they are blatant obscenities.

in circuits from dinner to danger;

resigned past the point of timidity,

more locked than the flame of a candle.

Yet there is in the pigeon’s blue highness

cast in the form of the shadow

of a statue of horse and rider

or, when its wings are extended,

a symbol of gossamer visions,

a hint of its earlier existence

in a world that was worthwhile and nurturing

when it lived in the forests’ dominion.

to consider it litter and vermin—

are pigeons still able to fly, even?

If you sometime should happen to see them,

dour in the gutters of rooftops,

close beside eggs that lie rotting,

you will see plainly a place where

a lusterless poetry flares now and then

in memory of all of its losses.

Posted by Douglas Messerli at 1:52 AM