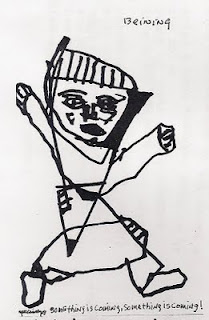 Born Guy Robin Nicholas Beining on September 26, 1938 in London to an aristocratic mother from Russia and a middle class Norwegian father, Beining arrived in New York City in spring of 1940. Throughout his youth he lived mainly in Connecticut.

From 1951-1954 he suffered bouts with rheumatic fever, which caused him to have to take school courses later from the University of Indiana (1955-57). He attended the University of Florida between 1958-1960, enjoying classes with Barry Spacks and novelist Andrew Lytle.

After leaving the Army in 1963, Beining settle in New York City, where he remained until 2000, with a few escapes to New England. A 1965 novel, rejected by Athenaeum Press, drove him to write poetry. He first chapbook was printed in 1976, followed a year later by City Shingles, published by Sun & Moon Press as a chapbook.

In 1995 two more poetry collections appeared, Carved Erosion and Axiom of a Torn Pulley (appearing in a limited edition of just 30 copies). He also had two prose poem chapbooks published, Too Far to Hear (Part 1) (1994) and Two Far to Hear (Part II) in 1997.

His most recent publications have leaned toward the visual, although, he observes, "after a five-artery by-pass, I have written a substantial number of poetry books, which are now making the rounds."

on a beach, one branch
level with eyes, holds a
copper bird that chirps into
grease of afternoon.
the owner of the eyes
is chewing on a string
that comes from a ball
of yarn that is placed
a picture book away.

light bows from corners, cracks,
& holes in curtains.
the common ground of this metaphor
has scratched away all distance.
floss mixes with dust & balls up.
the book on war has been erased
once again during this feverish silence.