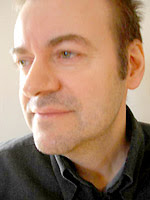 Grzegorz Wróblewski was born in 1962 in Gdansk and grew up in Warsaw, Poland.

Since 1985 he has lived in Copenhagen after publishing nine volumes of poetry and two collections of short prose pieces in Poland, three books of poetry, a book of poetic prose and an experimental novel (translated) in Denmark; and selected poems in Bosnia-Herzegovina (Mostar 2002). He has also published a selection of plays. His work has been translated into eight languages.

Old González, who feeds on grass
and collects fag-ends under the tables.
They say, that he once ate tortoise
to become immune from the coming
epidemic. (Americans throw him lettuce
leafs now!) Since that time tortoise have
never left him. González crawls on the ground
in silence. Filthy and popular as no other
tortoise in the vicinity.

Some times it’s women with a false diamond
in the ear, other times gossiping parrots
or failed politicians.
There came often to my uncle’s house, a priest
in company with a professor in corpse
conservation. They played poker
and drank peppermint liquor.
They had a good time together.
I also knew a man who chose
loneliness. (He had a passion
for silence and vermin crawling
on the walls!) When he died,
he bequeathed his body.
He was a huge man.
He lasted many months.

a brothel (250 per head)
a slaughter-house (a sweetish, sickly smell)
a barber (clips old men who are already dead)
this is my danish space and specifically
Valby Longstreet

a tired house-painter in white overalls
goes in, makes quick love
and leaves in his van from which
a folding ladder protrudes

(the butcher shovels up the red grease
from the street)

In a moment something bad will happen,
something I’ll be forced to forget quickly.
Or just the opposite.

Who knows their fate? An old washerwoman
hangs bed-clothes on lines between the trees.
When she sees the clear sky she is happy again.


RETURN TO THE BEGINNING PLACE

Stooping streets and bars on the windows.
(Inhabitants guard their hard-won rings...)
It occurs to me that I recognise some faces.
Someone suddenly answers my greeting.
The last day I pass a girl, whom once I loved.
The girl is dirty and limps. She doesn’t see me.
She disappears pulling a hand-cart filled
with glass, old newspapers and ripe tomatoes.

—Translated from the Polish by the author and Malcolm Sinclair