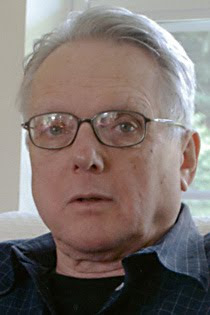 Born and raised in San Francisco, George Stanley was part of the 1960s poetry scene often described as the San Francisco Renaissance, which included figures such as Robert Duncan, Robin Blaser, and Jack Spicer, the latter of whom Stanley was a close friend.

He moved to Vancouver, Canada in the 1970s, becoming associated with New Star Books and the underground newspaper, The Grape. Over the past several years he has continued to be involved in Canadian politics, unions and alternative media, and was a long time educator in Terrace, British Columbia.

Stanley has described his own influences: “I was influenced by Spicer's poetry, by (Robert) Creeley and I was influenced by (Louis) Zukofsky and all of these I think were not particularly good influences on me; they sort of narrowed my poetry down, made it more tight….” My real influences, summarizes Stanley were early T. S. Eliot, Robert Duncan, Charles Olson, and Robert Lowell.

The common areas are where we meet
but don’t meet.

Somewhere I read, or was told,
I should smile.

An error here
might reflect on my right to be here.

We meet here, on our way
from the inside to the outside
the outside to the inside,
in this place that is neither in nor out,
this common place given for us to use,
coming in or going out.

When my fellow tenant and I are both going out,
we are each going into the world,
into our secret lives.


When we are both coming in that is worse,
we each know the other is going to his apartment,
where he has grave duties to perform.
When one is going out and the other in,
there is a sense of irrelevancy;
this non-meeting might as well take place
outside, on the street.

There are halls and walls
and carpeting.

And the doors that swim by
the eyes.

I recognize the old man
(the other old man).
He gives me a friendly greeting
but a little too quickly.

I give a friendly greeting
too quickly too.

I recognize the couples.

Yearly, they melt
into other couples.

I recognize the burly man in a gray t-shirt
with a big open face
who says hello.

to make an error here –
not to say hello, not to smile –
might lead the other tenant to think
you longed for his annihilation –

to be the only one –
to not have to hide
behind the smile.

There is a stairwell that goes down
past the lobby
to the garage.

There is an elevator that goes down
past the lobby
to the garage.

I have a parking space
but no car.

There is a lobby with mirrors & tile floors
& mailboxes.

There is a door that leads to the street.

When I walk through that door,
the common areas continue.

I know this man coming towards me
(with the glasses & ball cap).

There’s no reason I should dislike him
just because I’ve seen him
so many places
so many times.

but a tenant of what?

Would heaven be
total anonymity?