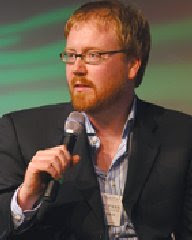 After graduating he taught at several schools in Canada and Italy, including Humber College (Toronto) and Canadian College Italy (Lanciano). On returning from Italy, he married and moved in 2000 to New York City, where his partner began pursuing a PhD in Sociology (studying poets, no less). He was asked to teach at New School University and had his first play for children, The Swan Chronicles, produced in Manhattan by Locomotion Dance Theatre. He returned with his partner and new child to Toronto in 2003.
Murray’s three books of poetry are The Hunger, The Cottage Builder’s Letter, and Carousel, all of which have been broadly reviewed and critically praised. He has published several chapbooks with small presses, and has been widely anthologized and has published poems in numerous journals and magazines in Canada, the US, United Kingdom, Australia and Germany. He won the 2003 New York Festivals Radio and Television Gold Medal for Best Writing for his poem “Anniversary: A Personal Inventory” (commissioned by CBC Radio) and has been nominated for a Pushcart Prize (2003). He has also won awards from the Canada Council for the Arts, the Ontario Arts Council, and the Toronto Arts Council.
Murray is a regular reviewer for several publications, including Canada’s national newspaper, the Globe and Mail. A former Poetry Editor for the Literary Review of Canada, he remains a contributing editor for several journals and magazines as well as Associate Editor for Maisonneuve Magazine. In 2004, he was featured on the documentary television program The Writing Life (Bravo). Currently, Murray sits on the Board for One Little Goat Theatre Company (NYC/Toronto), is the editor of the successful literary website Bookninja.com and is working on a book of new poems and some translations.

Still enough sky-glow left to distinguish
colour, even as the trees descend
through the registers of green and the stoop
becomes shrouded and difficult to discern.

From a crack in the dark wall hang loose wires.
Give a tug and watch society start
to unravel. There’s no real need to begin
worry; just be aware where the pulling leads.

We use the same yellow diamond to sign
elderly cross here as we do falling rocks;
the colossal meteor that astounds
observers burns but a moment’s autograph.

Apprehension may settle around us like dusk,
but the telescopes still capture first light.