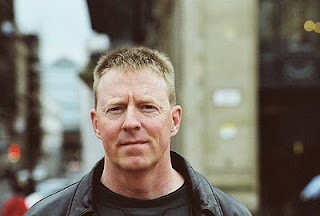 Born in Du Quoin, Illinois, George Albon grew up there and in St. Louis, Missouri. He took a degree in film theory from Southern Illinois University at Carbondale. For the last twenty years he has lived and worked in San Francisco, California.
His first full-length book, Empire Life, was published by Littoral Books in 1998. This was followed in 2000 by Thousands Count Out Loud from lyric& press, and in 2003 by Brief Capital of Disturbances, published by Omnidawn. This last title was awarded with four others “Book of the Year” by the Small Press Traffic literary foundation. A book-length poem, Step, is slated for publication at the end of 2005 by Post-Apollo press. Also slated at year’s end is an e-book, Momentary Songs, at the Duration Press website. His essay “The Paradise of Meaning” was the George Oppen Memorial Lecture for 2002.
“There’s a notion in my Oppen talk that, while referencing him, really applies to anyone’s struggle with poetry as I understand it, and that’s the idea of it resulting when a thematic bearing (on the one hand) and a glimmer of potential language-energy (on the other hand) somehow manage to appear to each other. In this context, form becomes the most metaphysical thing imaginable. Not the lattice, form is the horizon of thinking in poetry.”

I had a distant youth,
one outside the family.
I had a restless bargaining eye,
an altar to the provider.
I had my father’s dreaminess,
my mother’s soldiers.
I had to cut all the crap
and go straight into the deep end.
I had the mark of the day on me,
condensed to stray events.
I had a desire to be subtle,
but that implies a totality.
I had my eye on his gait,
he left the five and dime.
I had the judges give me a clue,
I encapsulated mystically.
I had a reckless view of the contest,
then an ill-chosen terrain.
I had a fever of computation,
spaces between halting words.
I had a level playing field,
the frenzy of the visible.
I had everything you could want,
roses, a song from the courtyard.
I had a minaret of perceptions
that began to stand in need.
I had a random grace period,
taking instruction from the intermediary.
I had a letter of introduction,
but no knowledge of the watermark.
I had flashes of mundane survival,
exhaling toward the sunlight.
I had one card tucked in,
I could step outside all that.
I had a method of response,
using up the inner self in living.
I had assurances from the victors
to see where the ground lies.
I had a tingle of vocation,
unaware of the subliminal fiat.
I had no money,
and he was such a laugh.