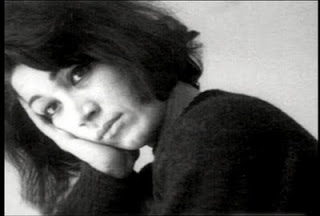 One of the major poets of Iran, Forugh Farrokhzad attended school in Tehran without finishing her diploma. At sixteen she was unhappily married, and was soon divorced, giving birth to a son, who remained the custody of her husband.

Writing poetry since the age of fourteen, Farrokhzad concentrated on her art, traveling to Italy, Germany, and England, which, in turn, highly influenced her work. She also turned to film-making, producing a documentary for UNESCO in 1965.

Her first collection of poetry, Asir (The Captive) appeared in 1952, and she used that title also for her second collection of 1955. This second collection made her the topic of great scandal through Iran, since as a woman she wrote freely about sensuality and love. Over the next several years she produced further volumes, Divar (The Wail) in 1956, 'Osyan (The Rebellion) in 1968; and Tavvalod-e degar (Another Birth) in 1964. The last volume has been translated into English.

In 1967 Farrokhzad was killed in an automobile accident.

Conquest of the Garden

The crow which flew over our heads

into the disturbed thought of a vagabond cloud

and the sound of which traversed

the breadth of the horizon like a short spear

will carry news of us to the city.

and that we have plucked the apple

from that playful branch beyond reach.

but you and I joined with lamp, water and mirror

and we are not afraid.

I am not talking about the flimsy linking of two names

and embracing in the old pages of a ledger.

I'm talking about my fortunate tresses

with the burnt anemone of your kiss

and the intimacy of our bodies,

and the glow of our nakedness like fish scales in the water.

I am talking about the silvery life of a song

which the small fountain sings at dawn.

We asked wild rabbits one night

in that green flowing forest

and the shells full of pearls

in the turbulent coldblooded sea

and the young eagles

on that strange overwhelming mountain

what should be done.

we found our way into the cold and quiet dream of phoenixes.

We found truth in the garden

in the embarassed look of a nameless flower,

and we found immortality in an endless moment

when two suns stared at each other.

I am not talking about timorous whispering in the dark.

I am talking about daytime and open windows and fresh air

and a stove in which useless things burn

and land which is fertile with a different planting,

and birth and evolution and pride.

I am talking about our loving hands

which have built across nights

a bridge of the message of perfume and light and breeze.

Come to the meadow

to the rand meadow and call me,

from behind the breaths of silk-tasseled acacias

just as the deer calls its mate.

The curtains are full of a hidden rancor,

and innocent doves look to the ground

from their white tower height.

─Translated from the Farsi by Michael Craig Hillmann

My whole being is a dark chant

will carry you to the dawn

of eternal growths and blossomings

in this chant I sighed you, sighed

I grafted you to the tree, to the water,

a long street through which

a woman holding a basket

a rope with which a man

hangs himself from a branch

a child returning home from school.

Life is perhaps lighting up a cigarette

in the narcotic repose between two love-makings

or the absent gaze of a passerby

with a meaningless smile and a good morning.

Life is perhaps that enclosed moment

when my gaze destroys itself in the pupil of your eyes

and it is in the feeling that I will put

into the Moon's impression of the Night's perception.

In a room as big as loneliness

my heart which is as big as love

looks at the simple pretexts of its happiness

at the beautiful decay of flowers in the vase

at the saplings you planted in our garden

and the song of canaries

which sing to the size of a window.

this is my lot

my lot is a sky that is taken away

at the drop of a curtain

my lot is going down a flight of disused stairs

to regain something amid putrefaction and nostalgia

my lot is a sad promenade in the garden of memories

and dying in the grief of a voice which tells me I love your hands.

I will plant my hands in the garden

and swallows will lay eggs

in the hollow of my ink-stained hands.

I shall wear twin cherries as earrings

and I shall put dahlia petals on the fingernails.

and think of the innocent smiles of a little girl

who was blown away by the wind one night.

There is an alley that my heart has stolen from the streets of my childhood.

The journey of a form along the line of time

and inseminating the line of time with the form

a form conscious of an image returning from a feast in a mirror.

And it is in this way that someone dies and someone lives on.

No fisherman shall ever find a pearl

in a small brook that empties into a pool.

I know a sad little fairy

who lives in an ocean

and ever so softly plays her heart into a magic flute

who dies with one kiss each night

and is reborn with one kiss each dawn.

─Translated from the Farsi by Karim Emami with Farugh Farrokhzad

It Is Only Sound that Remains

Why should I stop, why?

The birds have gone in search of the blue direction.

The horizon is vertical, vertical,

and at the limits of vision shining planets spin.

The earth in elevation reaches repetition,

and air wells change into tunnels of connection.

And day is a vastness

which does not fit into the narrow mind of newspaper worms.

The way passes throughout the capillaries of life.

The condition of the planting envirnoment of the uterus-like moon

will kill the corrupt cells.

And in the chemical space after sunrise

there is only sound,

sound that will be dream to the particles of time.

What can a swamp be?

What can a swamp be

but the spawning ground of corrupt insects?

the unmanly one has hidden his lack of manliness in blackness,

and bugs...ah when bugs talk,

why should I stop?

Cooperation of lead letters if futile,

I am a descendant of the house of trees.

A bird which had died advised me

to commit flight to memory.

The ultimate extent of all powers is union,

joining with the bright principle of the sun

and pouring into the consciousness of light.

It is natural for windmills to fall apart.

I clasp to my breast

the unripe bunches of wheat

the sound of the limpid wish of water to flow,

the sound of the falling of starlight

on the layer of earth's femininity,

the sound of the binding of meaning's sperm

and the expansion of the shared mind of love.

In the land of dwarfs,

the criteria of comparison have always traveled

in the orbit of zero.

I obey the four elements

and the job of drawing up the constitution of my heart

is not the business

of the local government of the blind.

What is the lengthy wild whimpering

in animals' sexual organs to me?

is the worm's humble movement

in the fleshy vacuum?

The bleeding ancestry of flowers

has commited me to life.

Are you familiar with the bleeding ancestry of the flowers?

─Translated from the Farsi by Michael Craig Hillmann

from Let Us Believe in the Beginning of the Cold Season

And this is I

at the threshold of a cold season

at the beginning of understanding

the polluted existence of the earth

and the simple and sad pessimism of the sky

and the incapacity of these stone hands.

I will never be warm again.

I shall give up lines

I shall give up counting, too.

And I shall seek refuge

from the finite geometric figures

in sensuous dreams of vastitude.

I am naked as the silence between words of love

all my wounds come from love

I have steered the wandering island

through the revolutions of the ocean

and the explosion of the mountain.

is the secret of the whole of existence

from whose smallest particles the sun was born.

let us believe in the cold season

let us believe in the runs of orchards of imagination

Look! What a heavy snow is falling...

─Translated from the Farsi by Gita Tabatabai

"Conquest of the Garden," "It Is Only Sound that Remains," and "Another Birth"

"from Let Us Believe in the Beginning of the Cold Season"

Posted by Douglas Messerli at 2:20 AM